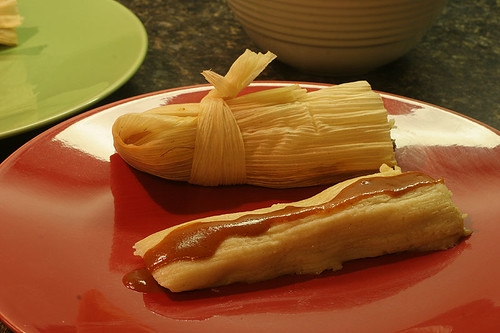 Tamales remind me of Christmas. They are a tradition in G’s family. My mother-in-law had 12 in her family. Every Christmas Eve all the brothers and sisters and their children and grandchildren would gather at G’s Grandfather’s on Christmas Eve. There were up to 100 people! His grandfather would dress up as Santa and pass out gifts to the children. My father-in-law would also put on Mitch Miller record of Christmas Carols and we would sign along. But the best part of the evening was the food. In the kitchen, there would be a huge pot filled with tamales. It was a homemade steamer. The bottom had tin cans and a rack to elevate the tamales. Then it was lined with a flour sack towel and in the towel were lovely nuggets of cornmeal wrapped in corn husks. In the center was shreaded pork cooked in a red chile sauce and a black olive. There was another pan of red chile sauce.

I loved taste of the sweet corn contrasting with the sharp heat of the red chile sauce. I’d sit in the kitchen and eat a half dozen. Later we moved away and I had to learn how to cook my own. I made a batch this Christmas. They are not hard to make but they do take time. It is easier when you break them out into different parts.

First thing to do is to soak the cornhusks. You can find dried corn husks usually in the Mexican cooking area of your supermarket. I put them in a large pan and cover with warm water. After they have soaked for a bit, separate the husks and continue to soak. It is best to soak overnight.

This is probably the most important part of the tamale. If you have a local Mexican grocer that makes corn tortillas, you can get fresh masa. The fresh masa will be lighter in texture. If not, you can use the packaged masa harina. That is what I usually use.

I like using lard because it adds extra flavor but G doesn’t eat meat. I don’t like the idea of using Crisco so checked my local grocer and found a wonderful organic vegetarian shortening. It is made of palm oil. I decided to give it a try this time. It was wonderful.

Have the fat at room temperature and whip it for lighter batter. Then gradually blend in the masa harina which has been mixed with broth. Try for a light and fluffy batter but not too moist. You will need to be able to spread it.

Several recipes suggest testing to see if the masa is light enough. After beating and mixing, take a small piece (1/2 tsp) and drop into a cup of cold water. It should float if enough air has been whipped into the batter. If not beat more with a bit more broth. I tried it but had no luck getting mine to float.

In a deep bowl, combine the masa, baking powder and salt. Pour the broth into the masa a little at a time, working it in with your fingers.

In the bowl of an electric mixer fitted with the paddle attachment, whip the vegetable shortening until fluffy; add the masa and combine until just mixed. 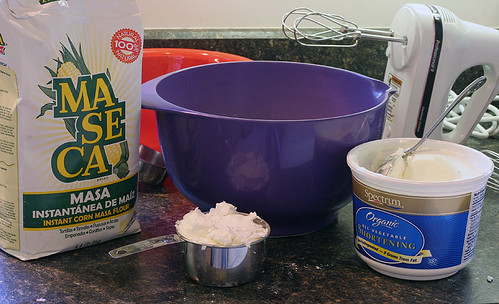 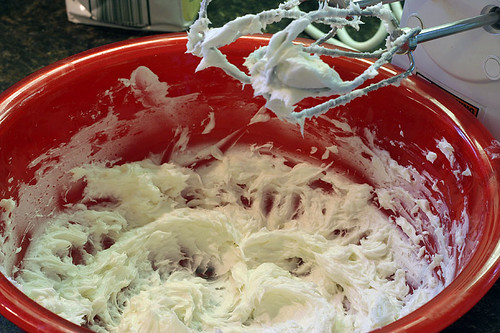 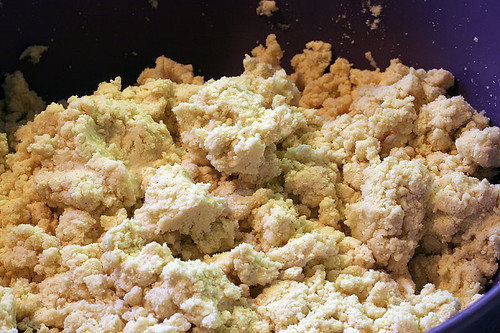 Typically you roast and shread pork, beef or chicken for the filling. I wanted a vegetarian filling so I used a mixture that I’ve used in enchiladas using mushrooms, roasted green chile, onions and zucchini. The mushrooms provide a meaty flavor and texture and are a good substitute for meat.

Roast the chile over a flame or under a broiler until charred. Put in a paper bag for about 5 minutes to steam. Remove the skin. Slit and remove the seeds. Chop the chile. 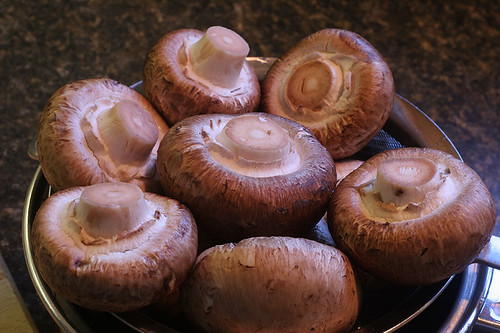 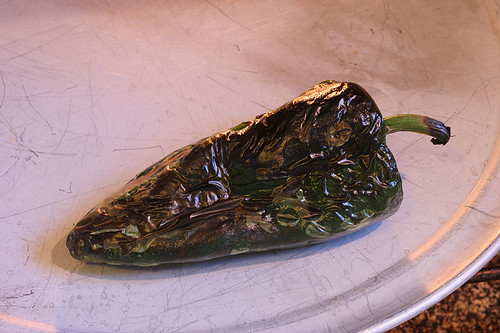 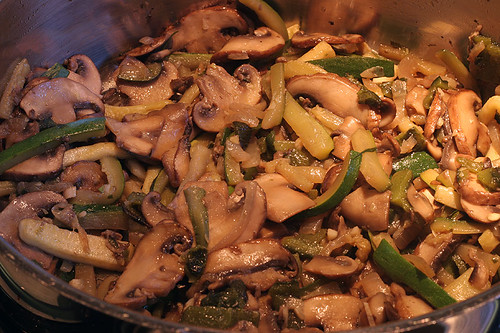 My red chile sauce is similar to gravy – a thickened sauce flavored with red chile powder. The secret is to toast the flour.

Over medium heat, lightly toast the flour to a tan color. Wisk in vegetable oil and cook for 3-4 minutes. Combine water, chile, salt and cumin. Add to flour oil mixture. Bring to a boil and reduce heat and cook for 20 minutes until thickened.

Spread about 1-2 tablespoons of masa in a rectangle on a corn husk. Spread about 1 tbs filling in the center of the rectangle and a spoon a bit of sauce. Fold the husk together and press the edges of the masa togther on the side and bottom. Fold the bottom of the husk up. Tie with a strip of corn husk and stand.

Stand tamales in a steamer and steam for 45 minutes. If you don’t have a big enough steamer, you an stand a rack on some cans with the tops removed. Line the bottom of the steamer with additional corn husks to prevent the water from splashing on the tamales.

You can also freeze the tamales. Put in a ziplock freezer bag and freeze before cooking. You can steam them frozen – just add an additional 10-15 minutes.

The tamales are ready if the corn husk peels easily from the cooked masa. Enjoy! 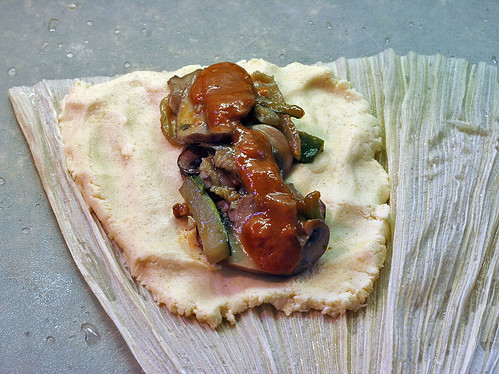 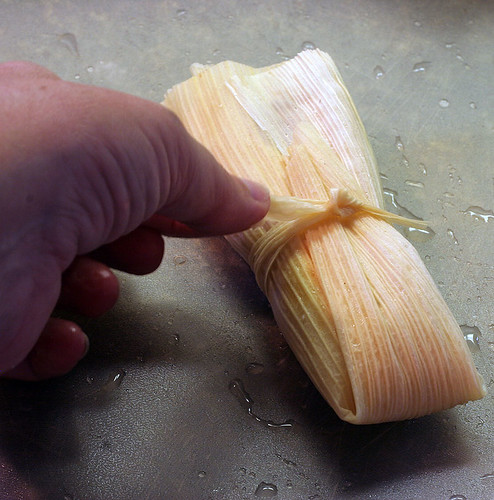 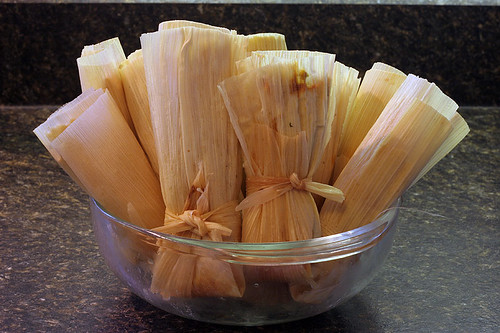