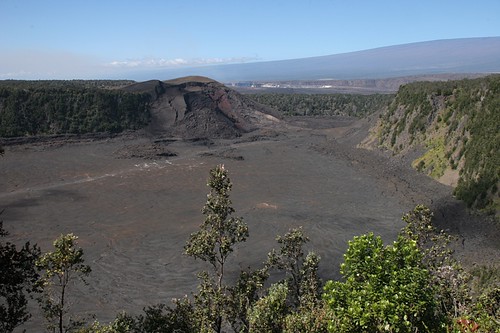 One of the items that was top on our list of ‘to-do’ on the Big Island was the Kilauea Iki Trail hike in Volcano National Park. In November 1959, the crater erupted in to a bed f lava. It spewed molten rock and lava lake in the crater. Remember those films of volcanoes erupting that you saw during the audio-visual period in grammar school. I’m wondering if it was a film of the Kilauea Iki crater erupting.

Today the crater is safe to walk across. It is still active with several spots where you can feel the hot rocks and see steam if there has recently been a rain storm. Overall the trail is rather easy – 4 miles long with an elevation gain of 400 ft to climb back out of the crater.

I also recommend getting the National Park brochure on the hike which sells for $2.00 at the visitors center or at the trail head. There are about 18 marked spots along the way which are talked about in the brochure.

Our friends from Vashon were arriving later in the day so we got an early start on Sunday. We left Kona before 8:00am. The drive on early Sunday was so beautiful and relaxing. It had turned out to be a beautiful morning with little traffic. We arrived at the trail head before 10am. Note – don’t forget to bring your America the Beautiful National Park and National Forest Parking pass. It will save you $10.00 entrance fee at the park.

The trail goes about 3/4 to a mile before starting down a rocky slope and switch back to the barren lava floor. You definitely need a lot of coverage from the sun since there are no shady places. The floor looks like a broken up asphalt road with its heaves and dips. You can see the large lava hill where the lava spewed from during the eruption. There are a few plants across the lava – mostly ōhi‘a which is one of the first plants to colonize the lava. The seeds are brought in by the wind and take root in the cracks. The trail is easy to find – just follow the cairns or ahu – stacked rocks to mark the trail across the crater floor.

After crossing the crater, the trail climbs in broad switchbacks up to the rim at the Thurston Lava tube. You knew you were approaching it even before you could see it from the hum of voices and rumble of the bus engines. We had not brought a flashlight so we passed on going in.

The trail continued for about another 1/2 mile before returning to the parking lot. It took us about 3 hours to meander along the trail. We always are stopping for photos or exploring the plant life. You could probably do it in about 2 hours typically.

We had a couple of hours before needing to return to Kona so we drove to the Jaggar Museum which is a great overlook to the Halema`uma`u Crater. Lava has been building in the crater so it has been quite busy at night. You can supposedly see the red glow of the lava if you come up at night. We had been checking out the status of the eruption and would have loved to see it but neither of us wanted to drive the 2 hours at night to see it. It is best to stay in Volcano or Hilo so you can easily drive up. We also heard a suggestion to get up early in morning before dawn to see it so you can then spend the day at the park instead of driving up in the evening and waiting for it to get dark enough to see. They also had closed the crater rim drive because of the activity and sulfur emissions from the crater. We were fortunate that the trade winds were flowing most of the time we were in Kona so we didn’t have any VOG.

We started back but first we drove a short distance up the road to Mauna Loa to the Kipuka Puaula (Bird Park) picnic area. We were just approaching the picnic area when we saw the signs to slow down warning us of Nene geese in the area. There they were! A pair was right by the road. It was so cool to see them. We also saw a couple of partidges along the way.

We ate our lunch in the empty picnic area and then headed back. Our friends arrived safely and checked in to the condo. They came over and we celebrated their arrival with a mai tai and we enjoyed a BBQ fish dinner together before heading off to bed. Tired but very content.