↓
Home→Hawaii→Big Island – Day at the Beach 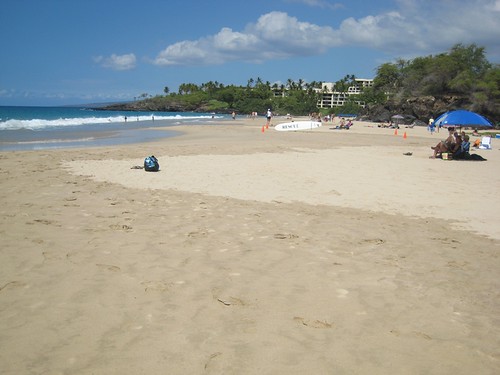 It was time for a relaxing day after our trip and hike at Volcano National Park. We lounged around and had a leisurely breakfast. I wanted to also get a Hawaiian quilt pillow. I try to purchase one on each trip. I got the first one on Kauai in 2008 at Kapaia Stitchery in Lihue. It is a great little fabric store filled with lots of tropical and Asian fabrics. They had a great selection and I purchased on with a ulu (breadfruit) leaf pattern. Botanicals are my favorite.

I did not look for one while Oahu although I remember finding some at the Honolulu airport but decided not to get one. I regretted it and decided to definitely track one down when we went on our trip to Maui. Hawaiian Fabric Mart did not have any. But I did find several at the Totally Hawaiian shop in the Whaler shopping center at Kaanapali. I brought home a pineapple pattern.

So the search was on again. I first went to Hawaiian Quilt Collection in the Queens Marketplace in Waikoloa. They had several and they were beautiful but a little too pricey for me. So we later stopped at Quilt Passion in Kona. They had a good selection although most were turtle pattern which I did not like. I did find a nice pattern with a cattleya orchid on philodendron leaves. It wasn’t exactly like the other ones – a bit bigger so I was a little disappointed still.

It was sunny and warm so we headed for the beach. We decided to go back to Hapuna beach. We loved the large sandy area and there was a lot of parking. But was it hot – hot – hot. I was pretty worried about getting burned because there was absolutely no shade near the beach. We changed and went ahead and slathered on the lotion. The surf was a little rough but what the hell – we only have two more days. We waded in since it was too rough to swim or float. The waves battered us but what fun. Occasionally they would knock us down and we’d be thrown up on the beach and dragged through the sand. But it was exhilarating.

We decided to all it quits after about an hour. We went to change and found sand *everywhere*. We tried to shower it off but it wasn’t possible at the outdoor showers at the beach. We moved up to the shade and had our lunch.

We made an early return to the condo and relaxed before getting together with our friends for a seafood pasta dinner which was excellent. They had spent the day at the condo pools. We were all tired so we called it an early evening. 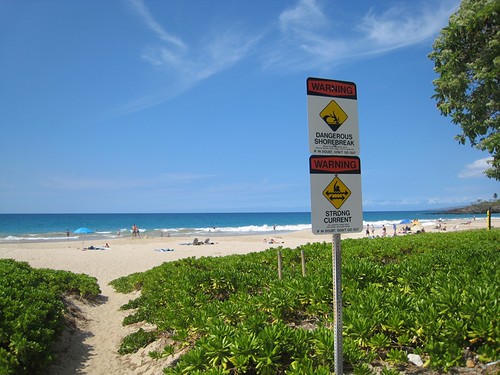 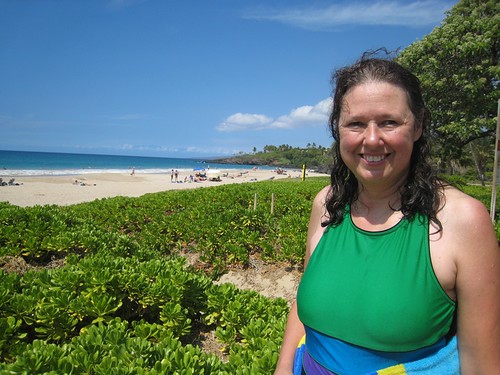 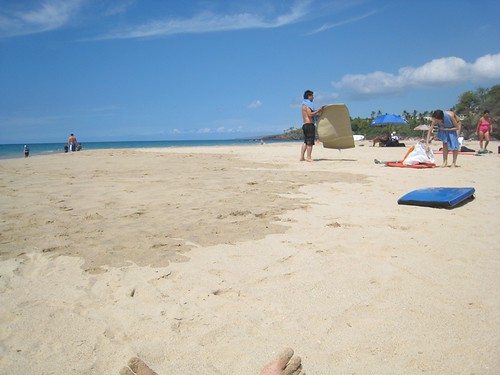 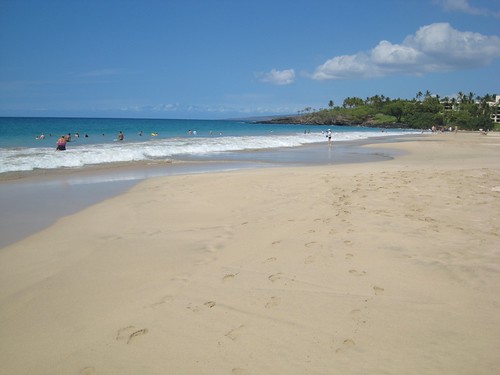