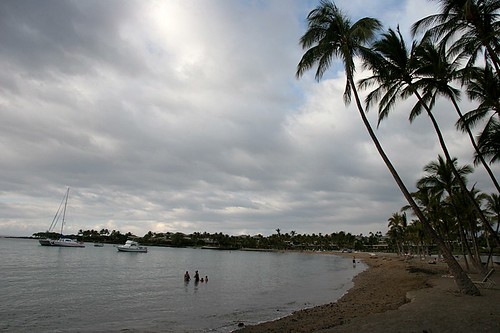 Saturday is the main farmers market day on the Big Island. There are several markets being held including Hilo, Waimea and in our neighborhood at Keauhou shopping center. We decided we didn’t want to drive across the island again so we planned to visit the market at Keauhou and then go for a drive up to the northern point at Hawi. We were hoping to include a stop at Big Island Brewhaus and check out the beaches at Kohala area.

I really liked the farmers market at Keauhou. It is a little small and you have to get there early but they had a great selection of fruit which is what I was looking for. I really wanted to pick up some dragonfruit which I heard was growing on the island. We had dragonfruit in Malaysia and loved it especially the pink fleshed varieties. Dragonfruit is the fruit or pod of the night blooming cactus. t It is similar to the fruit of the prickly pair cactus which I know by the Spanish name of tuna.

We got to the market about 8:30 and I found the pink dragonfruit. One vendor was selling two different varieties of the pink. The smaller pods were delicious, super sweet. The larger a little less. There were also vendors selling the larger white variety with yellow skin but I decided to pass since the white ones I had previously were not very sweet. BTW, they are somewhat like a kiwi.

There were lots of other fruit; papaya, starfruit, fruit similar to longan, different types of bananas, breadfruit, calamansi limes. I got papaya, starfruit and some apple bananas for the next couple of mornings. There were also several vendors selling Kona coffee, vegetables, fish, frozen meat along with jams, flowers, soap and a food stand.

We dropped off our purchases and then headed to Waimea. I am so amazed at the different terrain that you find just driving a few miles. Waimea is uphill at about 2300 ft. The road takes you from the tropical foliage to a more dry Australian type of semi-desert to a Mediterranean climate at Waimea. We located their farmers market. It was a little late so some of the vendors had already gone home for the day. They had a great selection of orchid plants for ridiculously inexpensive prices under $10.00. We almost bought some as flower bouquets. I did get some delicious goat cheese and a tasty glass of passion fruit juice.

We headed out to Kawaiihae and drove up the coast. Kawaiihae is a large container port but it did have one or two good restaurants including Cafe Pesto. Further north, this is definitely the driest part of the island. Lots of scrubby land until we went around the tip and entered the wet area again. We headed to Polulu Valley overlook to check out the view from the end of the road beyond Hawi. The road narrows and is windy with little one way bridges. it reminded us of the road to Hana but it is so short before you come to the end of the road. If you drive out, be aware, there is just a little bit of room to turn around and very little parking. We were able to park a bit down the road and then walked down the very steep, rocky trail to an outlook in the pandan trees to the beach below. The weather was changing again so we decided to head back to Hawi.

Hawi is an interesting little art community. It reminded me a lot of Paia on Maui except without the surfers. We stopped in Tropical Dreams for some killer ice cream; passion fruit sorbet and macadamia nut ice cream. The macadamia nut was excellent. The passion fruit was also good although a little tart. It is sold in other places on the island in little containers but it is best fresh in Hawi.

We headed back to Waimea stopping at an overlook to eat our picnic lunch. It was raining again and we had only the view of the low gray clouds. We stopped at Big Island Brewhaus. It has a tiny parking lot but I spied a place. The alternative is to park at the large church just down the road.

They had a long list of brews – over 12 or more varieties. They have one awards in the past for several beers including their IPA and Porter. I decided to have a sampler and G the IPA. I tried their lighter beers – wheat, pilsner, ginger, pale ale, IPA and smoked bock. All were excellent. The smoked bock was really different. I think I liked the pale ale the best but I usually do. They also had an interesting Mexican menu but we passed on lunch so we could eat back at condo. That is another disadvantage of buying supplies at Costco – it forces you to eat in.

Now it was off to the beaches of Kohala. Our first stop was at Hapuna Beach. What a beautiful beach although the surf looked a little rough. There was a lot of good body surfing going on. I was surprised at the amount of young kids playing in what looked to be a rough surf. But lots of family activity and fun on this Saturday. The dark clouds gave it a great spooky ambiance.

Next it was to check out Anaehoomalu Bay commonly known as the A-Beach. What a contract. It is much more gentle and lined with palms. People were longing on chairs reading their kindles. We heard the vows of a wedding across the way. It had great facilities and was super clean.

The evening was approaching and we headed back. We made one more quick stop at Maniniowali /Kua Bay Beach which I read was one of the more beautiful beaches. It was very crowded on Saturday and smaller than I anticipated.

Kona was not far now. The sun peaked out just as we came down Kamehameha III and a perfect ending to the day.

At The Farmers Markets

Kohala Beaches – Hapuna and A Beach 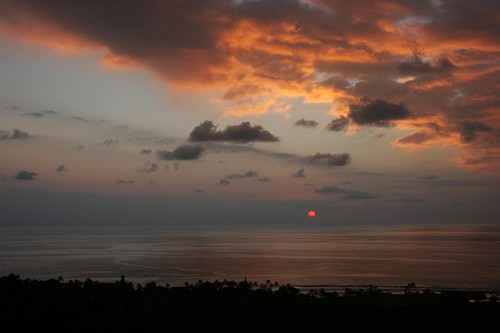