I went to lunch with my friend E today. We’ve been going to lunch once a week for the past few months after I found out that I was going to be laid off. I’m trying to continue getting together with friends once a week or so to get me out of the house. Otherwise, I suspect I will become a bit of a recluse.

I am taking the opportunity to explore Seattle after lunch. I feel like I’m rediscovering the city I live in. I never had much energy while I was working to get out and see where I live. I was doing 4 10-hour days and I focused on getting to work and home. With the traffic here in Seattle, that usually ate up another hour or two. There went 12 hours.

Last week after lunch, I went over to West Seattle. I was bummed because I didn’t have my camera. Today, I decided to explore the Fremont area and I had my camera along. This area is just northwest of Lake Union which I showed you pictures of on Saturday. It is separated from Queen Anne by the Ship Canal leading to the Ballard Locks.

It was settled early in the 1900’s when a trolley was run from downtown Seattle up into the works above Lake Union to Green Lake. The area along the trolley built up creating Fremont and made it an early suburb of Seattle. A wood trestle connected lower Queen Anne and Fremont. The neighborhood was hard hit by the depression and the creation of the Aurora Bridge. It became more seedy and run down. Later it attracted the bohemian crowd. In the early ’90s, it had a very irrelevant atmosphere and was nicknamed “The Center of the Universe”. During this time the Fremont Solstice Festival came to be. It is a crazy fair and parade known for its painted nude bicyclist which streak through before the parade begins.

Also in the ’90s, the art community brought several unusual items into the neighborhood; a status of Lenin, a huge rocket from a Army Navy store, the “Waiting for the Interurban” statue and the Troll. G used to sell plants at the Sunday Market which at that time was part flea market, part farmers market. The farmers section has now moved on to Ballard.

But things change. The dot-com boom built several large office buildings along the canal bringing large companies such as Adobe, Getty Images and Google to the neighborhood. Today you can see the old bohemians rubbing shoulders with the young geeks. There are also many small shops selling boutique clothes, gifts, shoes and art to make for an interesting stroll. Here are a few pictures of the neighborhood. 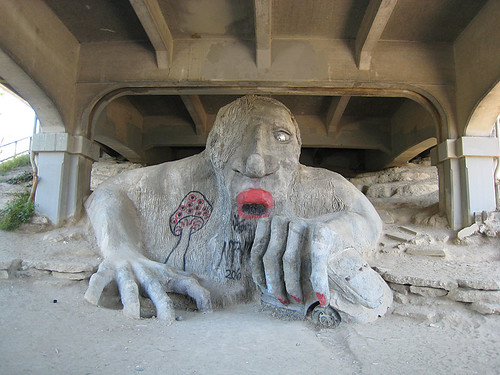 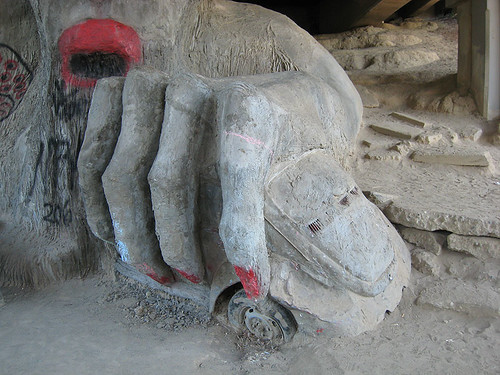 The Troll statue located underneath the Aurora Bridge. It has been painted up due to the Solstice celebration last weekend. The second picture shows the VW Bug that it is crushing. 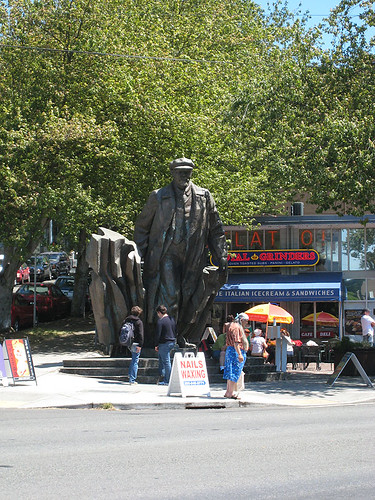 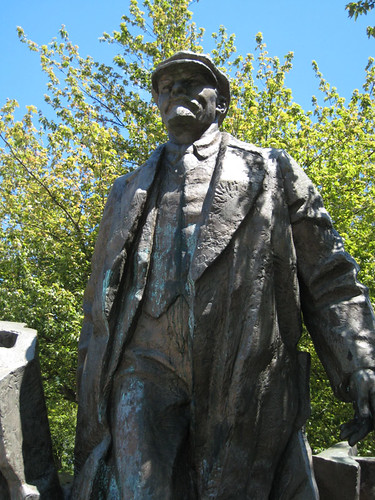 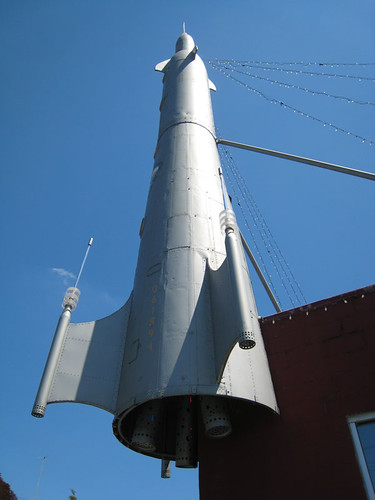 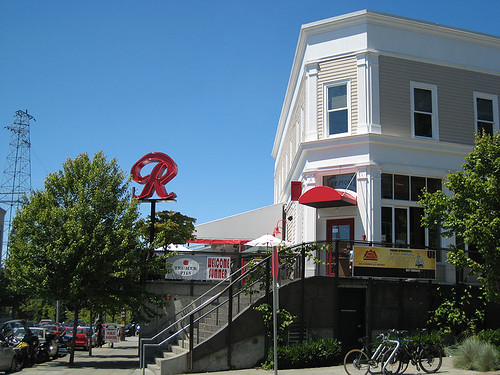 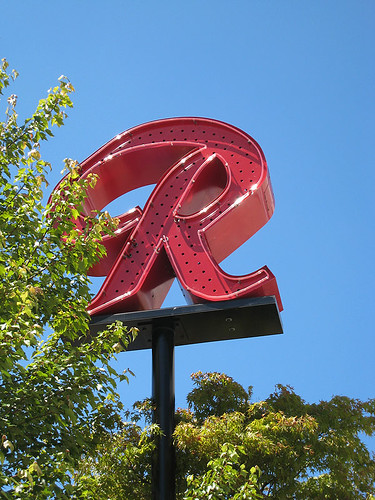 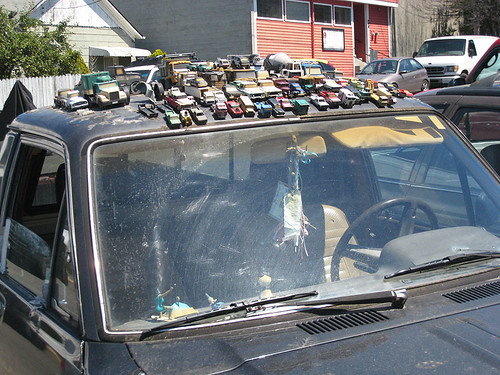 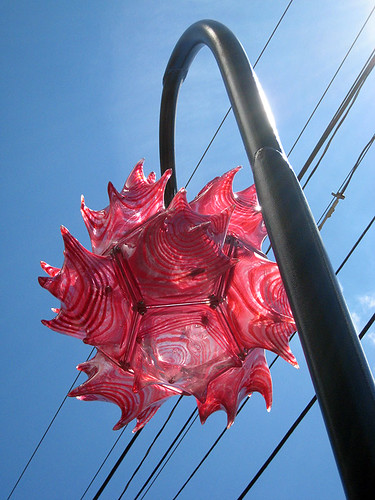 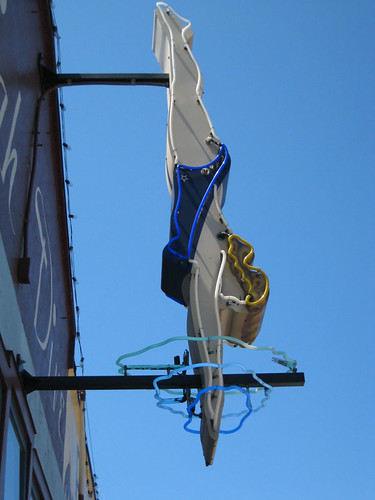 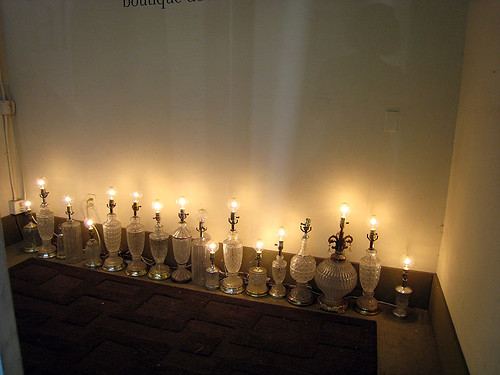 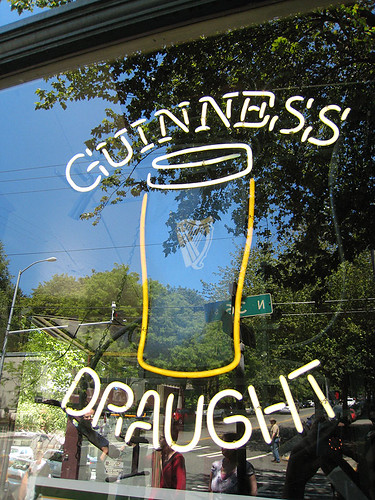 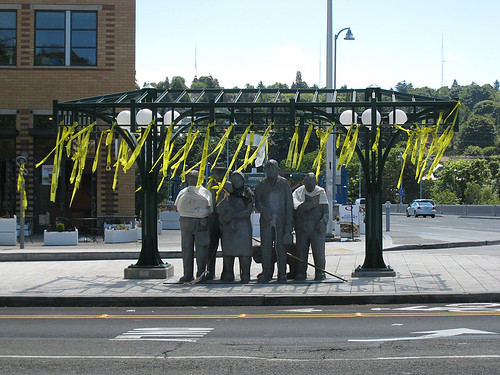 Waiting for the Interurban – Decorated for a locals birthday