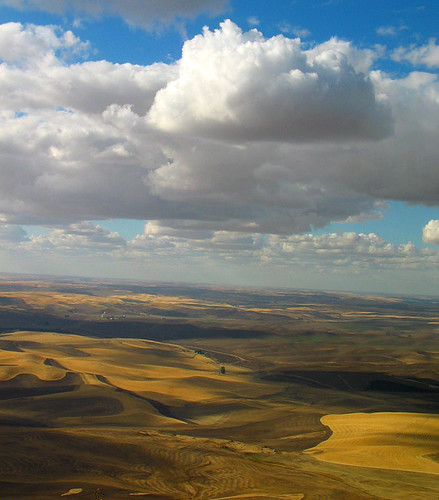 Dry Farmland of the Palouse in Eastern Washington

This has been a pretty uneventful summer. We ended up not planting a vegetable garden other than a couple of pots of tomatoes. The local farmers are happy since I’ve been a happy purchaser at the Edmonds Farmers Market.

We went camping Memorial Day on Whidbey Island again. The weather was the same as the previous two years – gray but no rain. We did a quick trip down to California for G’s parents 60th wedding anniversary. We got to see a lot of relatives and friends.

But we have no big international trip planned this year. We have ended up taking a few smaller long weekends and two week long trip. One of the long weekends are coming up – a road and camping trip to the South East corner of Washington State.

Over the years we have made it to most of the different areas but the one area that has just been a bit too far is the far SE corner. This is the dry farming area of the Palouse, the remote Blue Mountains and the Wenaha-Tucannon Wilderness area. The corner are made up of three lightly populated counties, Columbia, Garfield and Asotin – all three bounded by the Snake River. Garfield is the least populated county in Washington with less than 3,000 inhabitants. Columbia is not much bigger with just over a population of 4,000 and Asotin the biggest with a population of over 21,000 and the big town of Clarkston. I’ve wondered why there was a need back around 1880 to split this region into these three different counties.

At first, G was interested in hunting down a rare plant but we decided it was too difficult. We had also heard good things about a remote state park but it gets very hot in this corner near Clarkston. We decided to head higher up and go camping in the Umatilla National Forest outside of Pomeroy. Our wildflower hike book also mentioned to hikes near Mt. Misery which might still be good this late in the season. The flowers are a bit more like the flowers in the Rocky Mountains since these mountains are on the edge of the Rockies and Great Basin Desert.

We looked over the different campgrounds and we have a couple picked out. There will not be any water so we’re going to have to bring our own. Hopefully, it won’t be too hot and there won’t be any thunderstorms. We’ve been watching the storms and checking for fires.

I’ve been studying the map for a route. We’ve been to Walla Walla a couple of times. One trip we came back from Walla Walla through the town of Starbuck, crossing the Snake at Lyon’s Ferry and visiting Palouse Falls. I wanted to go that way to Pomeroy. On the way back, I want to swing up through the southern portion of the Palouse to visit a few farm towns and check out the fields. I think we will be too early for the harvest but we may have some good wheat fields.

The drives will be long. Google is mapping it out to be just under 300 miles to Pomeroy and 5 hours driving. The return trip is longer but it will give us a chance to see a very different part of our state