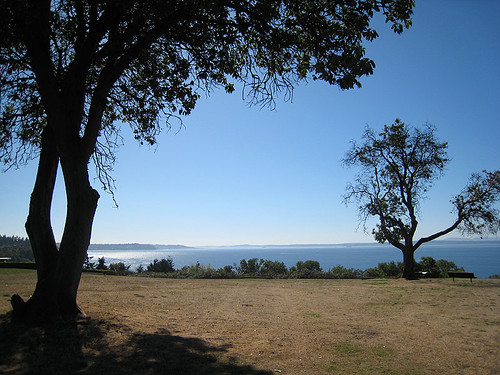 Before we bought our current house in Edmonds, we used to live on the edge of Innis Arden. The history of Innis Arden neighborhood is very interesting. In 1925, William Boeing (yes, the plane builder) bought up much of the land along the Puget Sound north of Seattle, from what is Blue Ridge in Seattle to roughly the county line just south of Edmonds. Much of this area was logged and several communities were built such as Blue Ridge. In 1940, the area north of the Highlands and next to Richmond Beach was laid out as the community named Innis Arden and sold to affluent upper middle class buyers from $1000-$5000 per lot. The cleared land provided unrestricted views across the Sound to the Olympics. The Innis Arden community had strict covenants that prevented buildings and trees to block views. This area continues to have gorgeous unrestricted views and lovely homes built in the older Northwest style. We lived just over the ridge and did not have a view but I would often ride my bike down along the curvy streets and enjoyed the expansive views.

Just next to Innis Arden at the bottom of the hill and along the Sound is Richmond Beach Saltwater Park. It is one of our favorite parks. We feel like it is one of our neighborhood parks even though it is across the county line and in a different city. We used the stairs at the park when we were training for Mt. Whitney. I will often drive over and walk along the beach. I find it very peaceful and calming. Just before Christmas, the city of Shoreline sponsors a huge winter bonfire along with carols provided by the local Christmas Ship.

It has been a while since I visited the park. They were doing renovations last year and we did not visit for a while because of the construction. Friday was a glorious Fall day and I stopped by. Wow! Lots of nice changes.

They have built several new picnic areas, added many new benches and view points and are working to replace the invasive non-native plants with natives along the hillside. They have installed several signs describing the history of the park. It was a sand and gravel mine in the early 1900’s which provided building materials for early buildings in Seattle. It also explains the steep terrain. It was sold to King County in 1959 by the Great North Railway. The Parent Map has a great page on the history and details of the park.

There is also a new art installation, Reflex Solaris. It is an interactive sundial. I figured out the sundial portion but totally missed the reflective portion of the artwork. I saw several mirror on the hillside above. At first, I thought they were some type of solar panel for generating electricity. There is one near the upper trail and I noticed that it was just a mirror. Hmmmm… I thought maybe it was for navigation purposes. From the blog post linked earlier, it is a set of mirror that reflect the different solstice and equinoxes. I’m going to have to go back and check out what is reflected along the hillsides. I also think they need something to explain the mirrors – I totally missed it!

I climbed the hill and walked along the upper path. The vistas were amazing in the clear Fall afternoon. Later, I walked down to the beach. Just as you reach the beach is a wonderful 10-foot bronze sculpture of a Salish Welcoming Figure carved by artists Steve Brown, Joe Gobin, and Andy Wilbur. I looked back and saw now how it all fits together – from a sand quarry at the turn of the 20th century to a wonderful public park today.

Here are some photos from my walk (click any picture to enlarge): 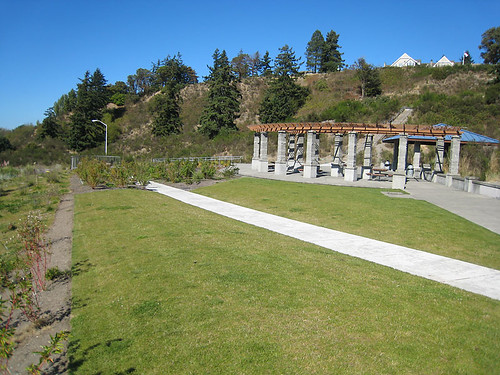 Panorama View from the Bluffs