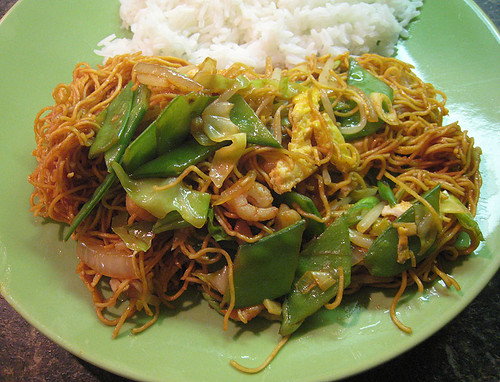 I’ve been craving Asian noodles after the excess of the holidays. Yesterday, I made Chow Mein which was very yummy. I had half of the noodles left over so I decided to try a new recipe. I looked over the noodle recipes on Rasa Malaysia – my go-to website for SE Asian dishes and found a recipe for Mee Goreng. We saw this dish at all the hawker stalls when we were in Kuching. I had a similar dish made with just prawns which was quite tasty.

I looked over the recipe and I had most of the ingredients. I did have to purchase a bottle of Sriracha which I had planned on trying. I did not have the thicker steamed noodles – the steamed chow mein noodles are thinner. It would be easy to adapt – just prepare the noodles according to the chow mein recipe but use the sauce from the Mee Goreng. I also had some pea pods so I added this although this is not typical of the dish.

The sauce is interesting. It uses oyster sauce and ketchup in addition to the chili sauce. The ketchup gives it a slightly sweet taste to contrast with the heat from the Sriracha. The noodles end up dark with tinge of red.

First step – prepare all the vegetables and combine the sauce. Next soak the noodles for 5 minutes. I like cooking the egg separately so I scrambled the egg and created an egg pancake which I sliced up to add at the end.

Ready to go – heat the oil, saute the garlic, shrimp, cabbage. Add the drained noodles and bean sprouts – stir to coat with oil. Add the sauce and cook until dry. You might need to add a little bit of water since the sauce is thick. When completed, add the wine and scallions. Serve. Enjoy!