I never do well in hot weather. So why did I think it would be different this time?

We slept in and lazily got up around 8:30am. We decided to go to Blue Willow for breakfast before going for a hike in Romero Canyon. I kept thinking it was Saturday instead of Friday so I was so surprised when we pulled out of the Ghost Ranch and saw school buses.

The Blue Willow is good but I always forget what to order. George always has the Huevos Rancheros and I sometimes have an omelet. This time I decide to go for the Blue Willow special which is eggs, green chile, corn tortillas, chicken, salsa and cheese. I don’t know what I thought it might be but it wasn’t what I expected. It was somewhat like a frittata smothered with salsa and a thick layer of cheddar cheese. My stomach rolled over a couple of times. I just can’t take the heavy fat in the morning. I scraped off part of the salsa and cheese and the eggs, tortillas, chile and chicken were actually quite good. It was similar to migas but I just couldn’t take the salsa and cheese.

I also broke down and had a cup of caffeinated coffee. Boy that tasted so good. I got a slight headache so I know I can’t do it too often but it was perfect. 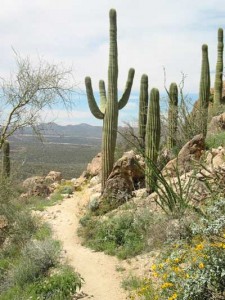 We finished and headed up Campbell to Skyline and then on to Ina and Oracle. We were heading for Catalina State Park to do a hike up Romero Canyon. We had wanted to do Brackett Ridge but the Forest Service had closed Sabino Canyon because of a mountain lion. The lion had been following hikers and joggers and the FS is worried about a possible attack on a human. The FS is planning on killing the cougar which does have many people upset. They do not feel they can relocate it because lions are very territorial. I hope they change their mind.

The parking lot was half full when we pulled in around 11am. We pull out the boots and head up. The trail crosses a small stream and enters a wash. The trail is a wide path through the mequite scrub. The sides are dotted with blues of lupine, jacobs ladder and water leaf. Spots of yellow desert zinna brighten the way. 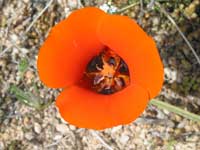 We stop to photograph one of the few mariposa lilies that we find. and talk for a while with another couple of hikers. We end up talking about hiking on the Channel Islands and gardens of Santa Barbara. 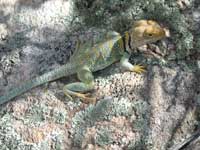 I am not doing well. The trail in this section is steep and the mid-day sun is beating down on me. I start to stop frequently and I’m getting light headed. Hmmm… I finally tell hubby, I need to go back – it is just too hot. Along the way down, we find a bit of shade and hubby discovers a collared lizard. George pulls out the umbrella and I hike the final mile and half with the umbrella feeling like a character in “Passage to India”. But it works!

We throw the boots in the trunk and head back to Tucson. We decide to stop at Tohono Chul Cactus Garden which is at Ina and Oracle. They had remodeled quite a bit since our last visit. There is a new greenhouse nursery at the beginning next to the Tea Room. George is lost for a while looking at all the plants. We also check out the two gift shops. I find an interesting Oaxacan wood carved cat to add to my collection. We walk the paths for a while before heading back to cool off in the hotel room.

Later that evening, we go for our favorite Mexican food at Marisco Chicuahua. I have Shrimp Rancheros and George goes for the Shrimp Diablo, shrimp in a a smoky chilpote chile sauce. Very hot but good. Washed down with a couple of Mexican beers – I am in heaven.

Back to the room for another early night. Tomorrow is the big day. We will be hiking to Mt. Wrightson and need to get another early start.