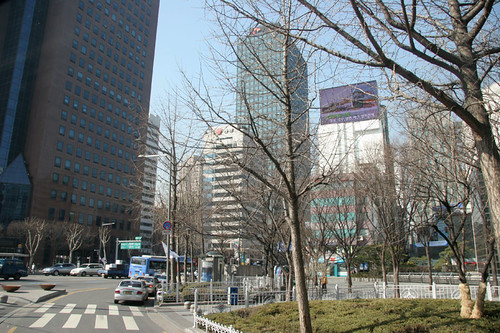 It has just been over a year since our trip to Borneo. We had a long layover in Seoul on our return. Asiana has a great option for the layover. You have an option of a hotel room or you can take a day tour of Seoul. The hotel room was tempting because our flight from Kota Kinabalu left at midnight and arrived at 6:30am in Seoul. We would continue on to Seattle at 6:00pm – 12 hours. But we were very curious about Seoul and felt the bus trip would be a great option to get look at the city. We had booked our flight on-line so we called the Asiana reservation line and made a reservation for the trip.

Incheon was pretty deserted when we arrived at 6:30am. We asked where to go to get vouchers for our day trip and they told us go exit through baggage and go to door or gate 13. We were really confused. We went down to the carousel 13 in baggage and it was deserted. So we decided to go out. Incheon is a huge airport. We looked around and realized that the areas near the different doors were numbered. We found the area 13 and there was an agent who gave us vouchers. We had to gather in the area around 8:30am.

We went in search of some breakfast. Nothing much was open yet but we had a good time viewing the different menus and window displays. Most of the restaurants were serving a Korean style breakfast which was not what we wanted. We couldn’t figure out what the Korean dishes were and did not want anything that might have meat. I think we finally decided to have a coffee and pastry at a Starbuck-like coffee shop.

We went back to the area and we were still confused. Every so often someone would come out and call out a name. It took us a while before we figured out that it was people who were being transported to a hotel. We finally found a group that was still waiting and asked if they were on the day trip. Yes. Good. So we waited around.

They finally called us around 9:30 and we boarded the bus. It is about an hour by bus. The bus went by tollway. It was the end of February and everything looked barren and gray. The areas along the water had some industry and greenhouses. So we had crossed over River into the main area of Seoul.

The river was lined with tall apartment buildings. We went by the Blue House – Cheongwadae where the president of Korea lives. This area had more trees and outdoor areas. Much of the area that we saw had high rises and very little open space.

We entered the CBD and our first stop was at Cheonggyecheon Stream. This stream had been covered over and a freeway ran atop it in the 1950’s. In the early 2000’s, the president decided to tear down the freeway and uncover the stream which provided more open space in the high rise area. I can see how it would be a beautiful place to visit in the summer. It was freezing and a bit windy but architecturally very interesting. We also visited a near by tourist bureau.

We reboarded the bus and moved on to visit the center of Zen Buddhism in Seoul – the Jogyesa Temple. What a peaceful spot in the midst of the urban. A ceremony was going on inside the beautiful temple but we had an opportunity to peak in and see the the three large golden Buddhas. More on this in a post to follow.

It was time for lunch. The bus parked in front of the Harley Davidson store. What a sight! Hogs in Korea. From here we walked a short block to a Korean Bulgogi restaurant. Stop by tomorrow to see lunch.

It was time to shop after lunch. The bus took us to the Itaewon area. It was filled with both Korean stores and many typical American stores such as Nike, McDonalds, Burger King. We went into a couple of stores but nothing was tempting.

It was almost 2pm so it was time to return to the airport. We still had about 3 hours spend in Incheon. I was able to find the free internet and museums after cruising the stores. The sun went down and we boarded our final flight to return to Seattle. 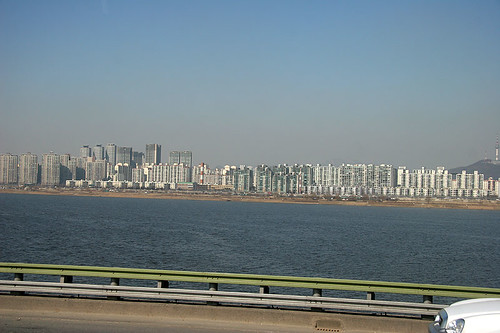 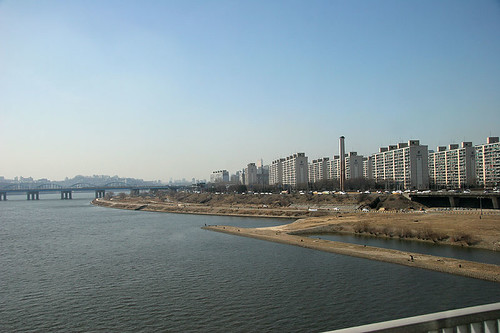 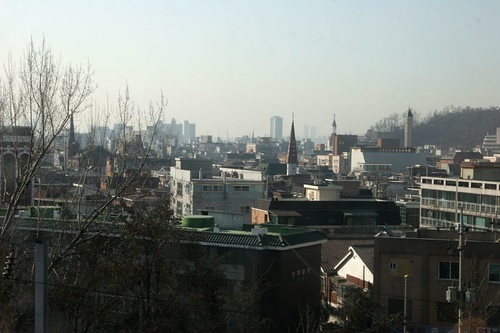 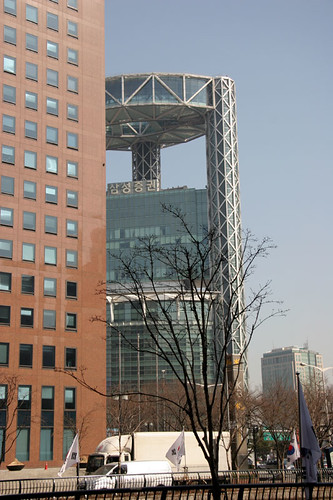 One of the more interesting buildings – Jongro Tower 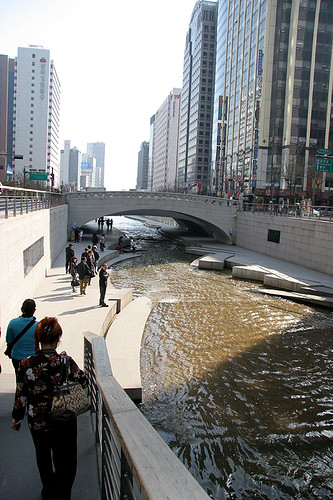 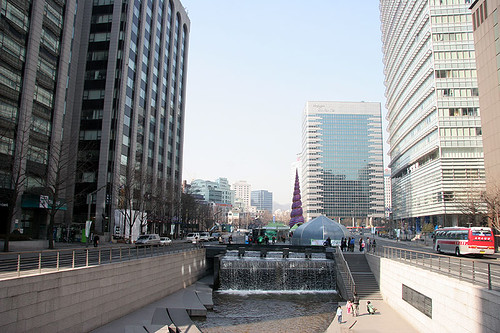 Waterfall near beginning of Cheonggyecheon Stream 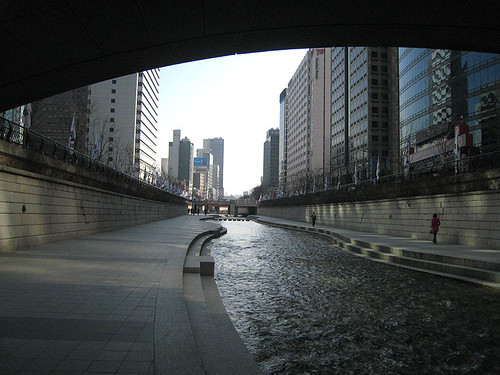 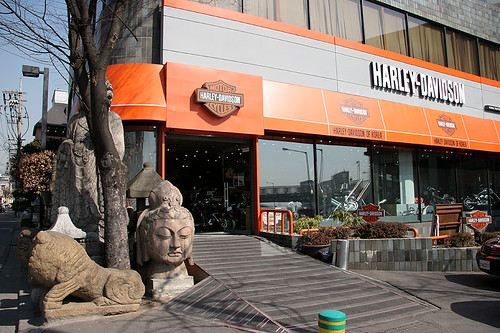 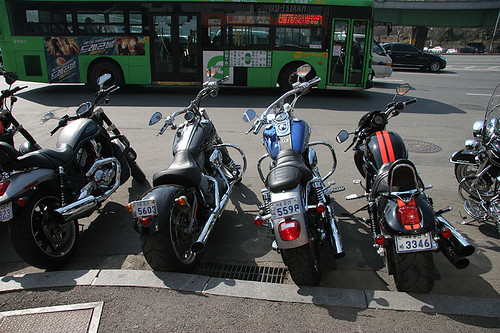 Here is a map of Seoul and were we stopped: