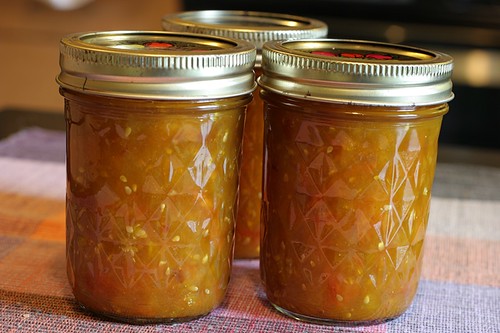 We have had a glut of sungold tomatoes. I always struggle with what to do with them especially since they seem to ripen all at once. One year I roasted them and froze them. Uhn-uhn… that didn’t work for me.

I’ve been intrigued with tomato jam. The first time I had it was in New Zealand in 1999. We were visiting a nursery on the North Island and the owners invited us in for lunch. They served us a crusty home baked bread with a white cheddar and a spicy tangy tomato spread. It was heavenly. So I thought – why not make some jam from the sungolds.

Now to find a recipe. As one site said… “There are as many recipes for tomato jam as there are cooks”.

After a couple of hours reviewing the web, I decided that I like Mark Bitman’s Tomato Jam from the NY Times but also like the spice combo in Food in Jar’s Tomato Jam. Food in Jar also had a Yellow Tomato Basil Jamwhich specifically mentioned using Sungolds. Hmm…

I ended up using the ratio of tomato, sugar, lime juice in the Mark Bitman recipe. I had enough to make 2 1/4 lbs which would be an easy modification of the recipe (1 1/2 cups sugar, 3 TBS Lime juice). I changed up the spices and used much less grated ginger (1 tsp), 1/2 cinnamon, 1/4 tsp cloves, 1 tsp red pepper flakes and added a 1/4 tsp ground coriander and 1 tsp salt.

I decided to follow the directions for the Yellow Tomato jam. I cut the sungolds in half, stirred in the sugar and let sit for over 1 hour until the tomatoes juiced. I added the lime juice and spices and brought to a boil. I boiled it med-high for about 30-35 minutes until it was set with the saucer test. Poured into jars and processed in a water bath for 10 minutes.

Initial tastes are very good. I might cut the cinnamon cloves a bit next time and add a bit more pepper and maybe a touch of cumin to make it a little more spicy. But overall very happy. 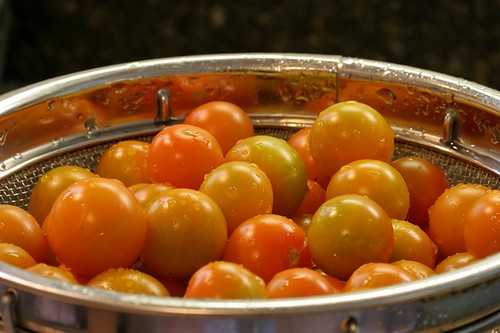 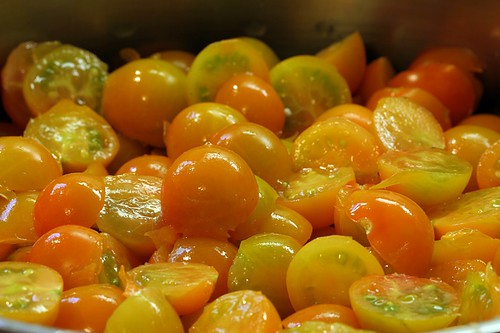 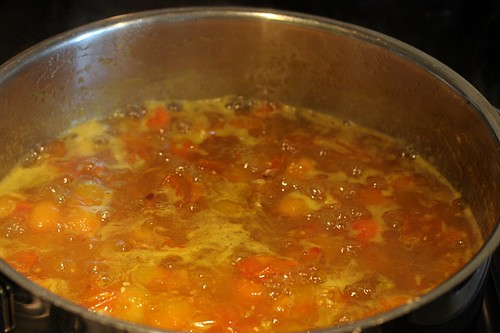 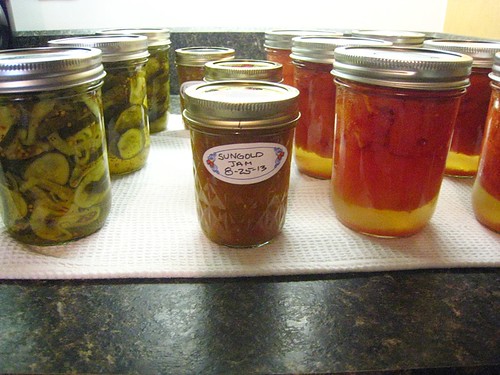