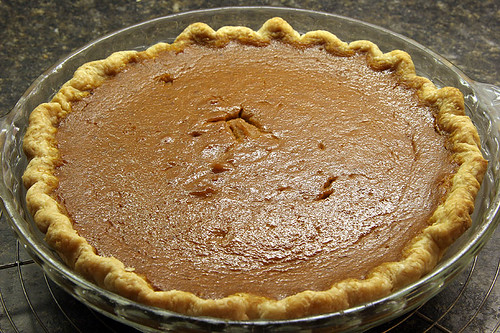 I love pumpkin pie. It was one of the first things I learned to bake. My mother had an old recipe book from the 20’s with a recipe that she always made. It pass down over the years and I’ve continued to make it. Pumpkin pie is rather straightforward custard pie. Pumpkin, cream, eggs, sugar and spices. What could be easier?

The hard part has always been the crust. I’ve had a standard crust that I’ve made over the years that used Crisco. Tried and True – never fails. But as I learned more about trans fats and how Crisco is made, I’ve been trying to learn how to make a crust using butter.

This year I tried the Sugar and Spice Pumpkin Pie from November 2008 issue of Fine Cooking. Instead of baking crust with the pumpkin filling, it bakes the pie crust first and then bakes the pumpkin at a low temperature. This makes much more sense. Typically my pie dough ends up soft and tough. The filling is over done.

The dough went together like a dream. It uses a lot of fat so it was easy to work with. It takes a little time and planning since it involves several chilling but it seemed worth while. I haven’t tasted it. I will be taking it to friends for dinner tomorrow. But it smells wonderful. Happy Thanksgiving everyone.

Dissolve salt in 1/3 cup very cold water. Put the flour in a food processor and put the butter on top. Pulse until mixture forms large crumbs – about 8 pulses. Add the water and pulse until the dough comes together in large clumps. Shape the dough into 1 inch thick disk, wrap in plastic and chill for 1 hour.

On a lightly floured surface, roll the dough into a circle. Transfer to a 9-inch pie plate, easing the dough into pie plate and pressing into place. Trim to a 1/2 inch overhang of dough and crimp

Turn oven down to 325 degrees. Whisk the pumpkin, eggs, cream and brandy. Mix the brown sugar and spices together in a small bowl and add to pumpkin mixture.

Pour into cooled piecrust and bake until set around outside – about 1 hour . Top with whipped cream.