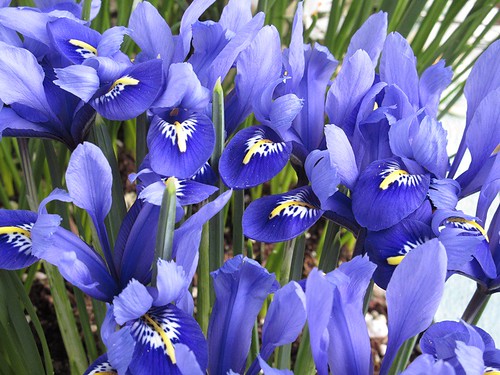 It finally feels like winter is coming to a close. I know there is a good chance still for some frost in March but the days are getting longer and more sunny days.

We have had a winter of heavy rain. No snow and no serious frosts although it did get down in the low teens once. But the rain! December and February have been deluges.

Everything seems to be right on time or a little early. The blooms have gone fast due to either a couple of warm days (almost 60!) or heavy rains. I thought I would layout a timeline of what has been in bloom.

The month started out frosty and cold. We visited the Washington Park Arboretum on 9th of January and it was too early. The witchhazel was just starting to bloom but much was still in bud. A few hellebores. The star was Daphne bholua.

We made our second visit about three weeks later on 31st of January and the arboretum was in its prime. The witchhazel bushes were lovely scented clouds of yellow, the cyclamen coum was bright pink under the Stewartia and fields of hellebore.

The month started with our small bulbs buds starting to color. The crocus and snowdrops reacted to a few warm days and by second week and Valentine’s day they were in full bloom in the backyard and in our front window box. The iris reticulata really did well over the winter and we had a great bloom. But the heavy rains mid month flattened them and bloom was over by the 3rd weekend (22nd). We also visited the arboretum a 3rd time on 20th and witchhazel was completely done as were the bulbs. Surprising their “Christmas Snow” hellebores did terrible. They may have had too much rain. They are stunted and not a lot of blooms.

There is also a lot of signs of growth. The crocosmias are coming up. The delphiniums are up at about 6 inches with several leaves. We had to prune our roses yesterday and the growth buds had already started to grow. The maples are starting to color with their leaf and flower buds. Indian Plum is starting to bloom.

I also love how the sun is up by 7:00am and it is still light at 6pm. Just two more weeks to daylight saving time and then the equinox.