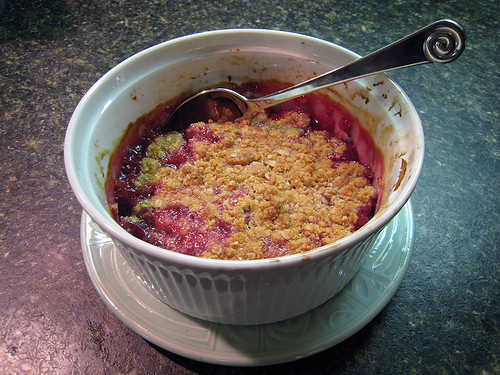 It is G’s birthday this week. I asked him what he wanted me to bake him for his birthday. I totally expected him to ask for something chocolate but he asked for a fruit cobbler. I was somewhat surprised. He said that chocolate cake is often too heavy and too much to eat. A cake or pie can last for weeks in this house. I try to cut most recipes in half so it will serve the two of us for two days but it can be hard.

We have a great source for frozen local fruit – Remlinger Farms. I have purchased both their frozen berry pies which are excellent and the bagged fruit. They are a great source for sour pie cherries. I priced them at the farmer’s market last July and they were running $10 per pound. Yozza! I can get a three pound bag of pitted frozen cherries from Remlinger for between $13-$15. It will make two pies or a couple of small cobblers. I also love their frozen peaches.

I had some of their frozen cherries in the freezer so I made a Sour Cherry Crisp from Cupcake Muffin Blog. I have made it several times and I really love the addition of the almond meal in the topping. Almonds and cherries are perfect partners. It is also a nice dessert to make any time of the year if you have access to pie cherries. Click over to her blog and check it out. 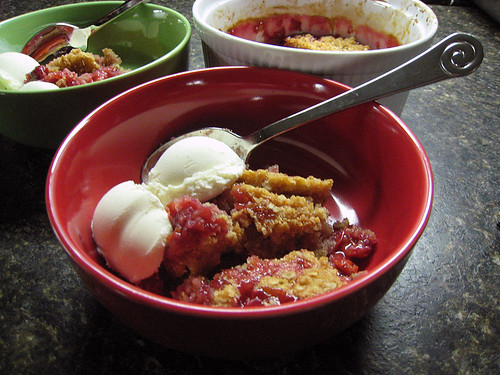