What a wonderful day! After a long stretch of cold dark damp gray days, we finally got a sunny break. G and I talked about getting out. We’ve had cabin fever stuck in the house. The forecast was for a good day on Sunday so we decided to travel up about 60 miles north of Seattle to the Skagit River Valley.

The Skagit River has a huge delta. Over the years it has created a rich flat valley that is still farmed. In the Spring, the fields are a patchwork of color created by the fields of blooming bulbs. This region is the number one region for growing bulbs in the US and second to Holland in the world. After the spring, the fields are used for a variety of crops such as potatoes, cabbage, broccoli and corn.

The farmers leave the corn stubble in the field over the fall and winter. Other farmers will plant wheat and rye as cover crops. This along with the abundance of marsh areas attracts hundreds of snow geese which migrate to the delta in the winter from Siberia. They arrive around October and stay until February or March. The estimation of the flock size is around 50,000 birds. In addition to geese, three types of swans migrate; trumpeter, mute and tundra.

Besides the migrating flocks, there are also hawks, owls and an increasing population of bald eagles that roost along the Skagit. The winter salmon steelhead runs attracts many eagles near Rockport and Concrete a bit upriver.

But it was the geese that we wanted to see. A birding friend had mentioned seeing them recently and that planted the idea. This would give us an opportunity to get out and also do a bit hiking. So we went on the search for the birds.

We started at an area call Big Ditch. I thought it would be good because it is a long levy that runs along the delta. We would have an opportunity to walk and stretch our legs. We arrived shortly after 10am. There were several vehicles in the parking lot; mostly hunters which had been out in the early morning. We walked a long for a while seeing very little. In the treetops, we spotted a red tail hawk. Out of the corner of my eye, I saw movement and heard a splash. I recognized the glossy dark brown fir. It was a pair of otters. That we so neat to see them. It was the first time for us.

We spotted nothing else so we started back to the car. Just as we arrived in the parking lot, we heard the sound of geese and a few gun shots to the south. The geese were on the move and heading north. They were in line to fly right over the parking lot and they did. What a magnificent sight to see and hear thousands of the large birds in formations flying overhead.

Now to see where they landed. We headed up to Hayton reserve on Fir Island. We had seen them in a distant field near there in other years. We started up the trail and looked west. There they were just a bit further up the road. We jumped in the car to see if we could get there before they left.

What we didn’t realize was they were right next to the road. Never had we seen them that close and accessible. There were thousands turning the field white. They were feasting on the winter rye; honking and moving around. By now they were attracting quite a crowd. We walked a bit closer but remained across the road. I was certain they would take flight. But they didn’t.

Another photographer moved across the road closer to the flock. The geese slowly moved away but did not take flight. Soon we all moved to the roadside next to them. They continued to eat and slowly move away. What was interesting is they moved towards a house but they didn’t seem to want to cross the driveway and move onto the lawn of the house. They must have sensed the humans inhabiting the area. Thus they seemed to be bunching up into a small area of the field. A few spilled onto the road. I have no idea why they did not take flight with so many cars and people around. But they did not.

I was snapping photos like crazy. But it was also nice to just stand and watch them. We stayed at least a half hour and they never flew off. We finally decided to move on to La Conner for lunch still in awe of what we had seen.

After a lunch at La Conner Brewery, we traveled north to an area called West 90. This area is known for short eared owls. I ran into my birding friend and they told us the owls were flying in the area. We walked out into the marshy delta area and soon we also saw them. They flew around and fought a bit with some harrier (marsh) hawks. You could hear the gentle cries of the owls contrasted by the hawk shrieks.

The sun was getting low in the sky and we were getting chilled. We had a cup of coffee and then started home. Driving along Padilla Bay we spotted several herons and decided to stop one more time. We walked a short distance along the Padilla Bay trail watching the sun slowly sink into the west and burnish the ending day with gold.

For more information, here is a Audubon guide to birding in Skagit area.

And of course, I took pictures. Here are a couple of photos and more at Flickr. 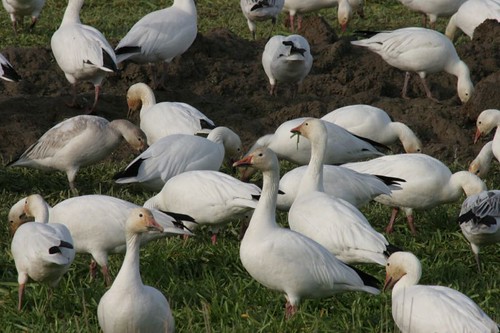 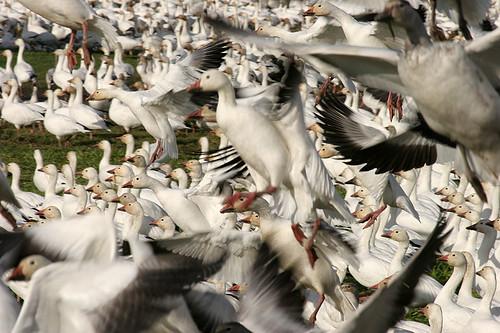