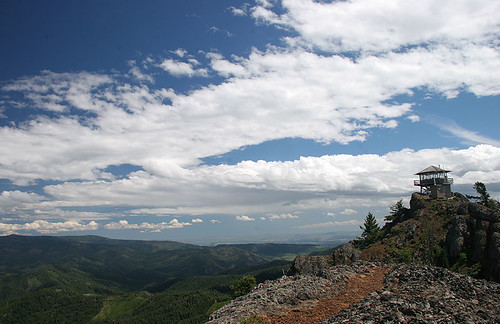 We have passed a sign to Red Top Lookout a million of times on our way to Teanaway hike but we never had a chance to drive up to the top. I have read a couple of hiking reports recently from people who have volunteered at the lookout or hiked one of the back trails to the lookout. One person also mentioned the details on where to find lovely mountain lady slipper orchids on the drive up. We had seen the orchid several years ago on the Ingalls Creek Trail but had not been able to find it again. We couldn’t bypass an opportunity to find it again.

I did a little research on the road to make certain that our little Honda Civic could make it on the road and found out that there are three forest service campgrounds at the road end before the trail to the lookout. The forecast was for good weather on the eastern slopes of the Cascades so we decided to check go flower hunting and camping the last weekend in June.

G has the packing well organized and we were on the road before 9am. It took just about 2 hours before we arrived at the turnoff. The easiest way from Seattle is to go over Snoqualmie Pass on I-90 and take Highway 97 at Cle Elum heading towards Leavenworth. Just past Mineral Springs resort, go west on the first FS road past the bridge. This is FS 9738. Drive just over 2 miles until you come to a Y and take a left on FS 9702. It will be about 4.5 miles from the Y to the parking for Red Top Lookout.

We easily found the orchids and spent a good half hour just taking pictures of the beauties before heading on. We wanted to give enough time for the campers to vacate and we could get a camp. 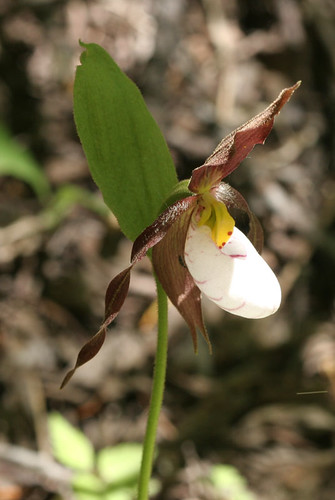 At road end is a large area for parking. The three spots were spread out. I noticed one group was just finishing loading their car so we pulled in to wait a brief moment before moving into their site. It was a perfect – a little shady so it was cool in the light wind but overall very satisfactory.

We set up camp and ate our lunch before heading up to the lookout. A steady stream of hikers and rock hunters went by our camp. There is an area below the look out that is used by rockhounds for hunting agates. It was interesting to see the groups of people going by with shovels and buckets for digging.

The lookout is about 3/4 mile from the parking area but about 350 feet up. It starts in the trees before quickly climbing up a red rocky talus slope. Oh my – the view! At our feet, lay the Teanaway valley and Cle Elum in the distance. We could pick out a couple of our favorite hikes. To the north was the majestic Mount Stewart and the craggy line of the Enchantments and Wenatchee Mountains. The day was brilliant blue but with large white clouds swirling around the snow capped mountains.

There was no one at the lookout. It is typically staffed by volunteers but there was no one there Sunday evening. We crawled along the rocks looking for different vistas and interesting rock garden plants. We walked for a while down the back trail before returning to the trail head. We then took the path to the agate beds which are about 1 mile. More lovely vistas and fields of early summer flowers.

We returned to camp. Most of the people had left for the day. There was one or two people who came up late in the afternoon and only one other camper. By 7pm, it was just us and the other campers at the top of the mountain.

We walked over to an open rocky area near the camp and investigated the area while the sun was going down. We found little frogs, wonderful wildflowers and a beautiful peacefulness. We called it a day.

The next day was cloudless. We broke camp and headed down. We decided to return over Stevens Pass and make it a loop. We stopped for a while and did a mile or so on Ingalls Creek Trail before heading in to Leavenworth for lunch and the drive back. 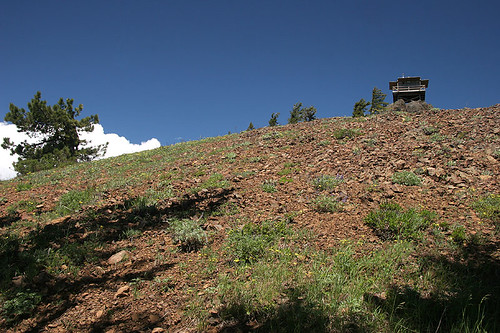 Looking up at the Lookout from the trail 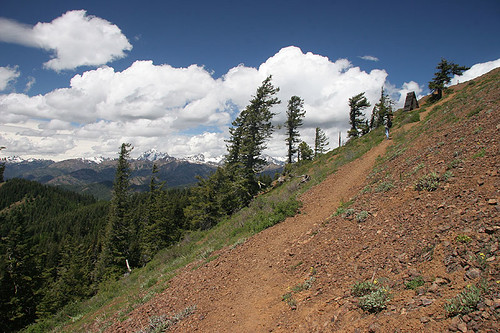 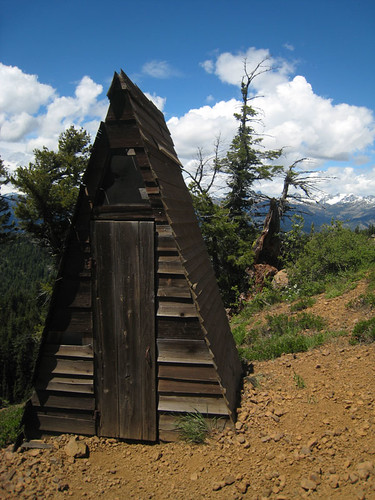 Outhouse with a view! 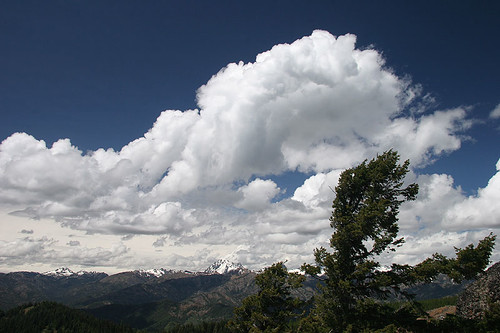 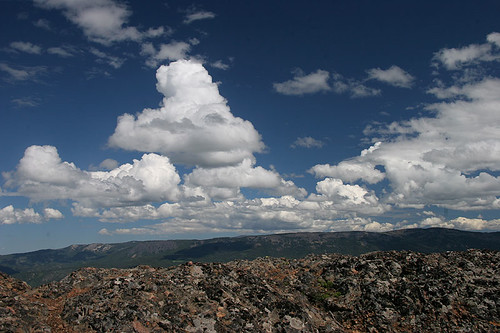 Panorama of Mt Stewart and the Enchantment Range