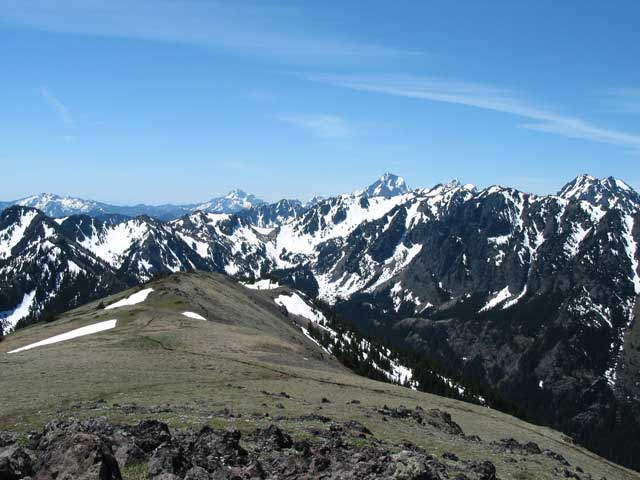 Time to hit the trail again. We had wanted to Mt. Townsend on the Olympic Peninsula during the spring. We climbed it last year in late July and it was wonderful. Lots of flowers in bloom. We noticed that there were many rhododendrons at the beginning of the trail and we wanted to go back in the spring to see the rhodies in bloom.

The day dawned early and bright. We easily rolled out of bed as the day was clear and sunny and made the 7:55am ferry. It is great going during the week because you can almost drive right on the ferry. The drive to Quilcene was leisurely and we turned on Penny Creek Road which leads to FS # 27. The flowers started right away and increased as we got nearer the trailhead. First off were bright red columbines but soon we saw the pale to dark pink blossoms of our state flower, Rhododendron. They were blooming all along the road and especially up in the clear cuts. It was cool to look up a clear cut slope and see the splotches of pink. Indian paintbrush and blue lupine lined the road as we drove further along. 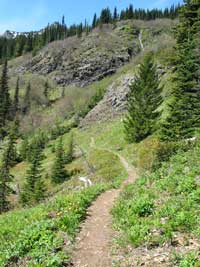 After about an hour from the ferry, we parked in the upper trailhead. There were two other cars and another car pulled in just as we started the hike. The forested trail starts climbing right away at a 20% grade. You hardly notice the grade because the trail is in excellent condition with few rocks or roots to step over. The rhododendrons were not in bloom in the forest. We couldn’t decide if it was because of the elevation or the shade. We also noticed that there were not that many flower buds.

After about a mile or more, the trail, leaves the forest and starts switch backing up out of the valley. In a week or two, the hillside should be in bloom, but right now the paintbrush is just starting to color and most all the other flowers are just emerging. There are some nice bright pink patches of douglasia along the way and lots of phlox. We did come across a large patch of chocolate lilies which was nice to see.

After about 2.5 miles, we reached Camp Windy and a few snow patches. Shortly after this is the junction to Silver lake. We continued up switch backing among the juniper and knick-a-knick. The views were outstanding. We could see Rainier to the south. Glacier peaked just the tip above the foothill haze and we could see Mt. Baker to the north. Squinting, we could actually see a few of the downtown Seattle buildings in the haze. 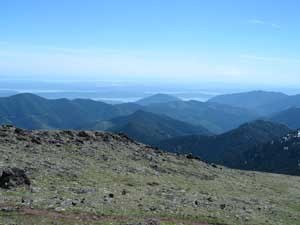 After 2 hours and 4 miles, we reached the crest and walked along the ridge line to the summit. It was a little windy but still warm enough to enjoy our lunch. There was no snow above Camp Windy even at the top. There were a few plants in bloom at the top; mostly geum and cinquefoil.

We were just finishing up our lunch when another party made it to the top shortly followed by several other parties. It was time to leave. We made it back down in about 1 1/2 hours. We weren’t as lucky making it to the ferry. We hit the 3:30 peninsula traffic and just missed the 3:45 ferry. Oh well, the day was warm and we napped waiting for the ferry.

And we weren’t tired at all. It was an 8 mile RT hike and 3,000Ft gain. But was I hungry. I made a big bowl of penne pasta with a sauce of ham and peas in cream. Yummmm.. A load or two of laundry and finally it was off to bed.