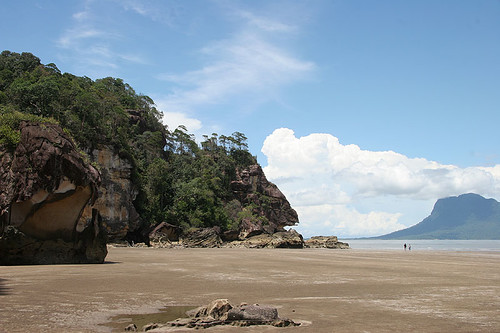 This is the thirteenth in a series of more in-depth posts on our trip to Borneo.
February 24

Bako National Park was the main reason we had traveled to Sarawak. Like Mt Kinabalu, it is known for unusual plants including several unique species of Nepenthes. It was also home to the Proboscis monkey. They are frequently seen among the mangrove swamps near the headquarters at low tide.

Bako is not far from Kuching but it is not easy to get to. There are no roads to Bako. It is located on an isolated peninsula beyond the river estuary. It can be done as a day trip but most guide books recommend staying at least one night. This allows you an opportunity to hike and experience the jungle at night.

We decided to stay overnight. The park services are run by the Sarawak Department of Forestry. There are no commercial operators. We contacted the park by email and were able to reserve a room in the 2 bedroom chalet. It was described as having 2 twin beds and an attached bathroom. Cost 50RM (~$20US). We had to pay in advance so we made a trip to the National Park office which was located next to the Kuching Visitors Center.

The inexpensive independent way to get to Bako is to take the Petra Jaya bus number 6 to Bako Village. The buses start running around 7am and cost 2RM. You catch the bus at the open market near the city Mosque. We backed our day packs with just what we needed for hiking and staying overnight. We put our main luggage in storage at the Singgahsana and then headed out to try to catch the first bus. The schedule on the bulletin board in the hostel said 7:20. We got there about 7am. We could tell right off that there were several other tourists waiting. We started talking with another couple who was from Holland and a woman who was from the UK. The boats to Bako take 5 people so we agreed to go together and split the cost of the boat which was 47RM. We were approached by several minivan drivers while waiting for the bus. The cost for a minivan was 40RM. 8RM per person versus 2RM by bus. The couple from Holland knew that the tide was changing in two hours so there was a chance that we might miss our opportunity to get to Bako in the morning. We discussed it but decided to wait for the bus. It finally showed up around 7:25am. We got on and it headed out.

The ride took us through the suburbs of Kuching. It was rush hour and the traffic was pretty backed up at the major roundabout. It took a good 10 minutes to get through the roundabout. The area became more industrial and we could see large factories. Small shanty towns surrounded the edge of the factories. School children would get on at the stops out in the middle of nowhere and travel a short distance before getting off for school. In the suburban areas along the way, women setup stalls along the road selling small triangles of rice (nasi) wrapped in banana leaves – fast food breakfast for the commuters.

It took us about 1 hour until we arrived at the Bako Kampung (village). We checked in at the headquarters. They checked that we had reservations and paid our entrance fee of 10RM. The low tide started at 10am so we were close to the last groups to go over to Bako until the tide changed. The Ranger explained that we were going to have to wade ashore since the tide was too low to dock at the boat launch. He mentioned that there were stingrays and jellyfish in the water and recommended that we swish our feet before we set the into the mud. What had we gotten ourselves into???

There was a notice at the boat launch warning about crocodiles. Oh goodie. We walked down and climbed into a small boat. We all put on life vests and then we headed out. Along the way we passed stilted houses and poles set out as fishing traps. The way was mostly smooth but it was also so exotic and exhilarating. We stalled a bit on a sandbar at the mouth of the river but soon we were in the bay at Bako.

We should have known with the difficulty that the boat had getting over the sandbar that we would not be able to be dropped off close to shore. The beaches are very shallow and extend a long way out into the sea – I would say almost 1/4 mile. The boatman cut the motor and it was time to jump out.

G went first with his Birkenstock. The water was up to his knees and the mud sucked off his sandals. I was glad I had zipped off the lower part of my pants. We all went over the side holding our backpacks and shoes. Slosh.. slosh.. we went slowly ashore.

Other than being muddy, it was fine. We came ashore near the canteen. The signs told us to go a 1/4 mile further to the park headquarters where we checked in. It was only 9am and our rooms were not ready yet. So we gathered everything that we needed for our day hike into our hiking pack, put on our boots and stored our gear in storage bins in the headquarters. It is not locked but there is usually someone around.

We couldn’t check in until 2pm so we did some wildlife watching, had lunch and went for a hike. I’ll detail this more in the next post.

The canteen is self-service with a variety of Malaysian noodles and curries. There was also a small store with a good selection of drinks, salty and sweet snacks. We bought a large bottle of water along with our breakfast. It was about 15RM.

We returned from our hike about 2pm and were able to check in. Our chalet was basically a duplex. It was one large room with a waist high cabinet separating what might be the eating area from the sleeping area. There was an oscillating fan bolted to the ceiling. We opened the windows although the rangers told us to keep them shut. The windows were screened but not secured. The long-tailed macaques showed up and climbed up to the windows. They were just waiting for us to turn out backs on them and they would push the screens in and rifled though our bags. The rangers called the ‘naughty monkeys’ and the definitely were.

The bathroom was basically a tiled room with a toilet that filled very slowly and a hand-held shower. There was only cold water. In the main room there was a sink, a screened cabinet for storing food and a refrigerator. The walls were stained and dirty. We discovered that there was only a cover on the bed – no sheets. Little did I know my pillow was also moldy. I wouldn’t find out until it kept me awake during the night. Fortunately it was only one night.

Here are some pictures of the trip and accommodations. 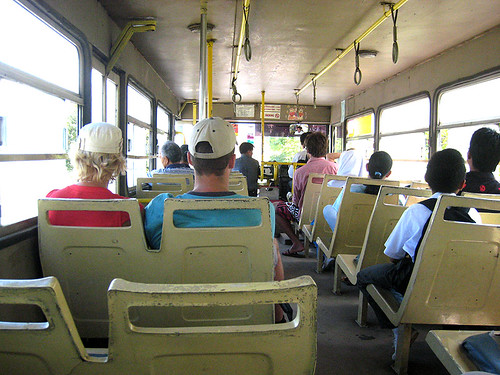 The bus to Bako 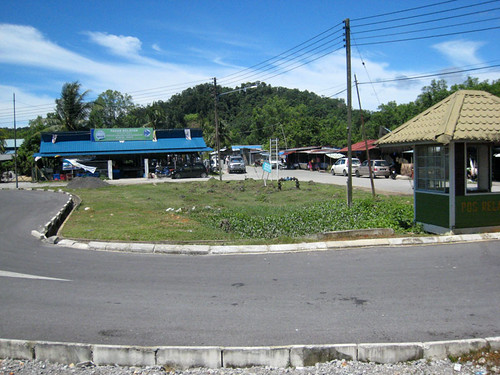 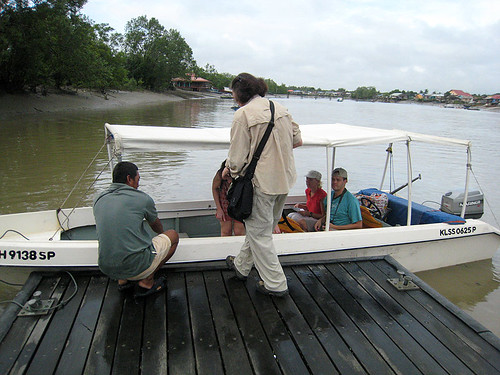 Getting on the boat to Bako 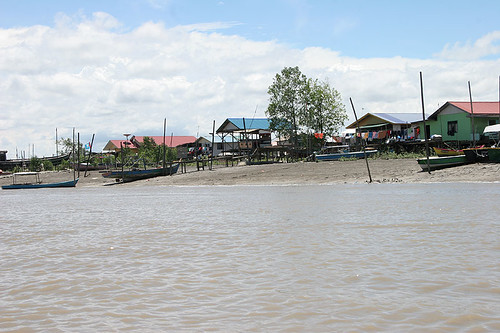 Stilt houses along the river going to Bako 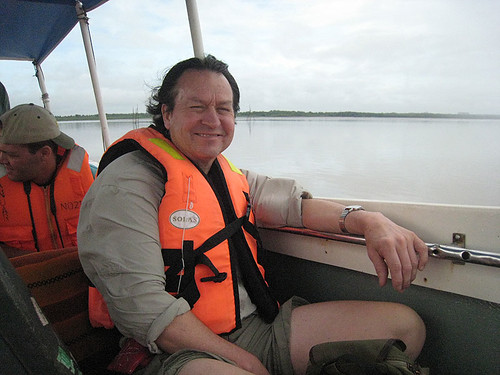 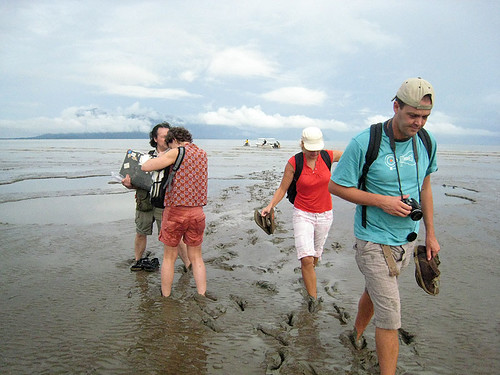 Just after the boat dropped us off. You can see it in the background leaving. 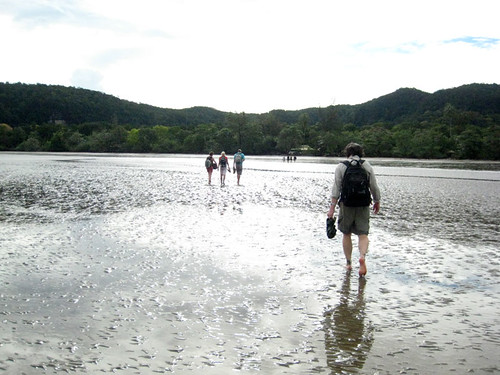 A little ways more to go 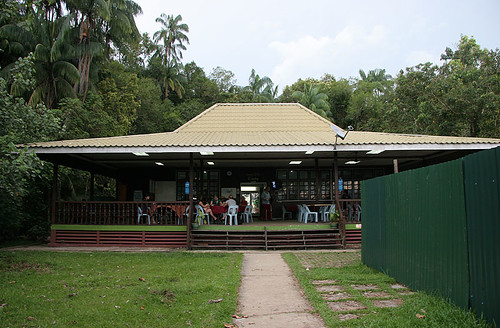 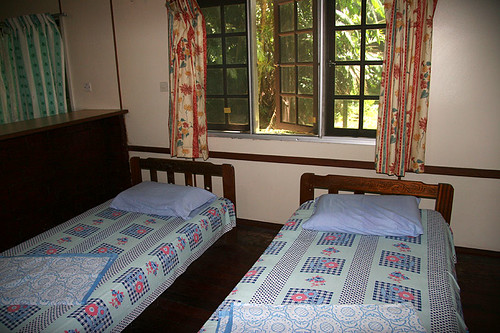 Our room at Bako 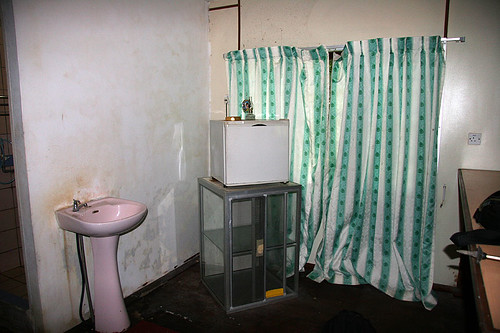 A refrigerator and a place to store food. 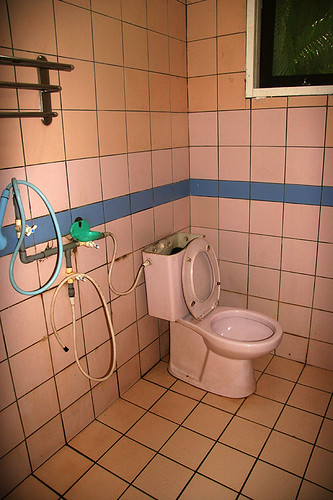 Toilet and shower – no shower for me that night! 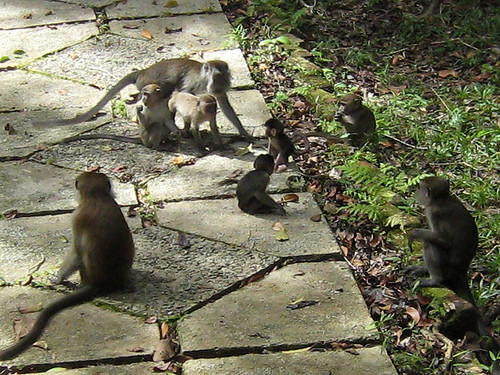 The naughty monkeys waiting to get in our room