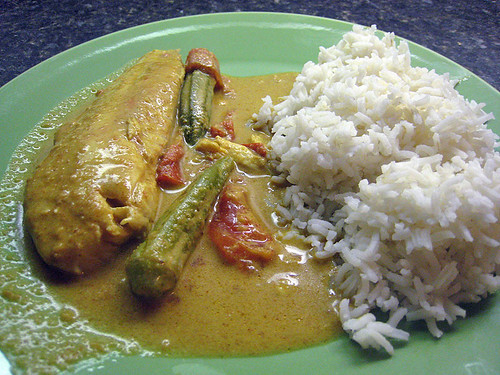 We have enjoyed trying different recipes for curry from “The Exotic Kitchens of Malaysia”. The difference between the recipes have been very subtle. Some include lemongrass and lime leaves, others have tomato and cardamon pods, some have tamarind, others do not. It is all an adventure in eating.

I mentioned before that one of the favorite dishes in Singapore was Fish Head Curry. I didn’t try it. I was looking at the recipe and it sounded very good. It added several different spices in addition to curry powder that sounded interesting. It also added tomato and okra. I decided to try it with just a tilapia fish fillet instead of a head.

The recipe called for okra. Okra is common in Malaysian cuisine and it is called “Ladyfingers”. That nickname makes me smile. Growing up on the west coast of the US, my only exposure to okra was in Campbell’s Chicken Gumbo soup. I picked up a package of frozen baby okra and I decided to give it a try. We loved it.

I didn’t have any curry leaves so I will need to try this recipe again. But the addition of the cinnamon, anise and cardamon added a nice touch in addition to the tomato and okra. I think I’m ready to try the fish head in Malaysia.

Process the shallots, ginger, and garlic to a smooth paste with 1/4 cup of coconut milk.

Heat the oil in a large pan, add the spice paste, cinnamon, star anise, cardamon, and cloves and stir-fry over low hear 2 minutes. Add the curry powder, chili powder, and the rest of the coconut milk. Combine well.

Bring the mixture to a boil and add the tamarind liquid, curry leaves, tomatoes, fish heads, and okra. Simmer the curry, covered over low heat for 30-35 minutes. Baste the mixture several times during the cooking but do not stir.