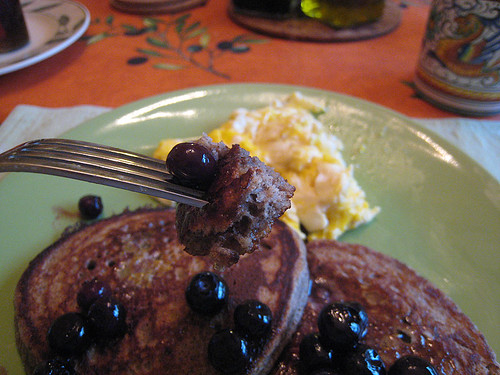 I used to use a mix for making pancakes and waffles. Most were very thin and tasteless. Okay… not completely tasteless – more like cardboard. There was one mix that I really liked was the buckwheat pancake mix from Bette’s Ocean View Diner. I can’t find it locally any longer so it was time to make buckwheat from scratch.

I picked up some buckwheat flour from Bob’s Red Mill and went in search of a good recipe. I really had to search because buckwheat is non-gluten so there were many ‘healthy’ recipes or recipes which used all buckwheat. I wanted something a bit more like a buttermilk pancake but with the added flavor of buckwheat. Nice and fluffy.

I found two recipes that looked like what I wanted. The Buckwheat-Buttermilk Pancakes on Herbivoracious had a lot of good tips on buckwheat pancakes. The quantity was too large for just the two of us and his recipe is not easy to half. I also came across a recipe for a Blueberry Buckwheat from Sunset Magazine which combined three flours – wheat, buckwheat and corn. It sounded interesting but I wasn’t in the mood for corn – plus I mainly had only course cornmeal in house.

I ended up making it very similar to the recipe in Sunset but reduced the leavening. They were yummy. It made 6 large pancakes.

Heat skillet over medium heat. When hot, add a small dab of butter and pour 1/3 cup of batter. Shake pan lightly and cook until edges are dry and bubbles start to break in middle. Flip and cook until done.

Serve with plenty of butter and warm maple syrup. They are also good with a spoon of warmed blueberries. 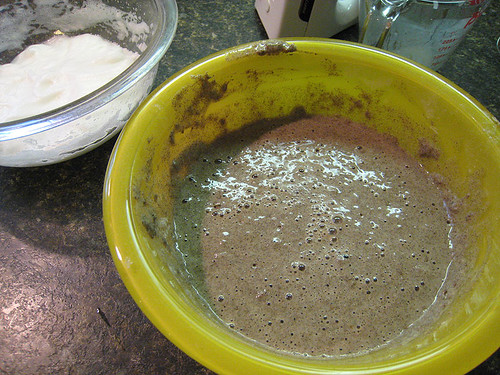 Batter after stirring in wet ingredients 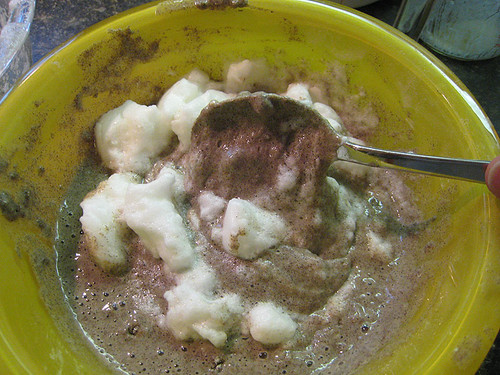 Folding in the egg whites 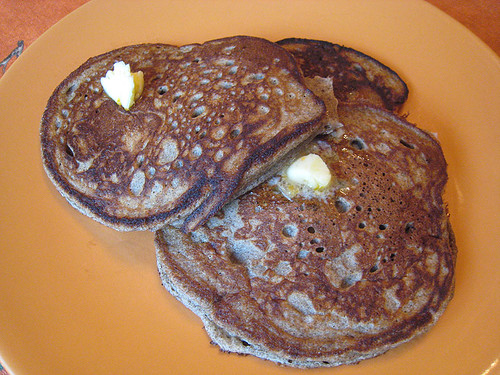