I need a spur to get back to blogging. It is November and time for the NaBloPoMo – National Blog Post Month at BlogHer. It is the push I need to do some blogging and get my travels recorded.

To start, let me tell you about our recent trip to the Big Island in Hawaii.

We had timed our trip to Hawaii right as far as weather in Seattle. The fall had been glorious and felt a lot like summer until just a week before our trip. The temperatures had cooled and the daily gray mist had returned. It was a pleasure to think of a week of tropical temperatures.

Our flight left just before 9am which meant we didn’t have to get up in the middle of the night. It takes us about 35 minutes to drive to the airport and about another 10 minutes from parking so we left about 6:30 and we were at the airport by 7:30 easily. We decided to pass on another cup of coffee and headed out to gate where they were just getting ready to start boarding.

The Hawaiian flight was full. We were to get breakfast on the plane but we should have gotten a sandwich instead. It was terrible. It was basically a bagel like roll, cream cheese and guava jelly. The dried tropical fruit was fine.

The flight to Honolulu took about 6 hours. I read my e-book and slept a bit so the trip went somewhat quickly. They served us a Mai Tai before we landed so we were in a good mood.

We had a 2 hour lay-over in Honolulu which gave us time to move between the main terminal and the inter-island terminal. We were hungry and the choices at the inter-island terminal were not much better than the plane; an American hot plate (beef and gravy), Burger King, Chinese Steam table and the bar with a menu that had no prices. G doesn’t eat meat so we went with the Chinese steam table – bad move. It was over cooked vegetables and mystery meat for me. The noodles were fine.

The trip between Honolulu and Kona was easy – about 45 minutes in a Boeing 717. Fortunately our carry on fit on it. It is actually not that small of a jet unlike some of the other small jets like the Canadian models.

Landing in Kona is very different. The guide books warn you but you really do not fully imagine what it is like to look out the window upon miles and miles of black asphalt looking lava. Where exactly am I?

The airport is pretty small and it was easy to just follow the crowd out and to the shuttle to car rentals. We got our car from Avis since Costco had a deal with $35 off and low price – $225/week for a compact. No one else was there which was also great. Everyone had headed to Alamo where we usually rent.

We were off. G was navigating and our first stop was the Costco just about 2 miles from the airport before getting into Kona. You definitely need to have the “Big Island Revealed” guidebook to find it since there are no signs. Or do as I did – just follow the other cars.

Stopping at Costco has its pluses and minuses. It has a good selection and excellent prices – but the quantities are almost too large for 2 people staying a week. We picked up milk, POG, eggs, beer, bread, Mai Tai premixed, a salad for dinner, shrimp poke, chips and an opah filet. On hindsight, we could have used less milk since we had eggs for breakfast instead of usual cereal and we probably would have preferred not be limited to Kona beer for a week. I really wanted to try a couple of the other local beers but the case was going to last the week.

The traffic was pretty slow. It was probably ‘rush hour’ – almost 5pm – plus there was a huge cruise ship in port. It was about 30 minutes through Kona to our turn off to Keauhou and down to our condo. One more stop – at the Keauhou shopping center and the ATA for smaller items, like rice, butter, jam, cheese, etc .

We found out condo on Aloha Condos. I had used them for our rental in Maui two years ago and I really like their website. The site has lots of details and most importantly photos and videos of the condos. Each is privately owned so the decor is different. It is also very easy to use website.

We choose unit 203 at Kanaloa at Keauhou. It did not have an ocean view but instead a view to the golf course which was very quiet and relaxing. The birds in the morning on the fairway were enchanting. I loved the decor and it was exactly as shown on the website. It had everything we needed and was very clean and lovingly tended by previous guests. There were also nice touches such as an excellent welcome basket with lots of local fruit. Besides having a well stocked kitchen, it also had everything you needed for days at the beach. The bed was super comfortable and very fast internet. We felt it was also an excellent deal given the accommodation, location and facilities.

The only thing a little disappointing was the weather. It was overcast and pretty humid. Oh well… you can’t have everything. We unloaded and relaxed in preparation for our week. 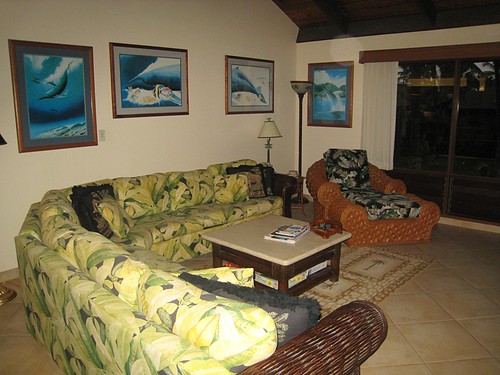 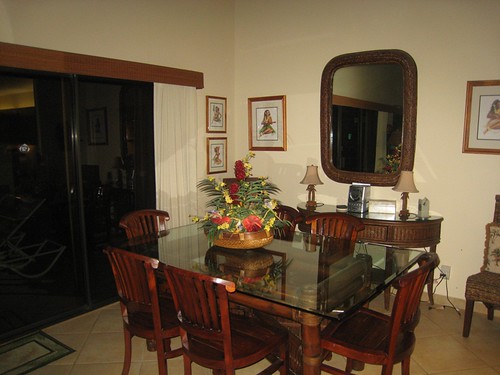 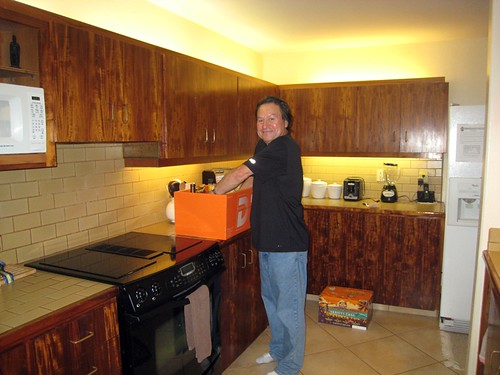 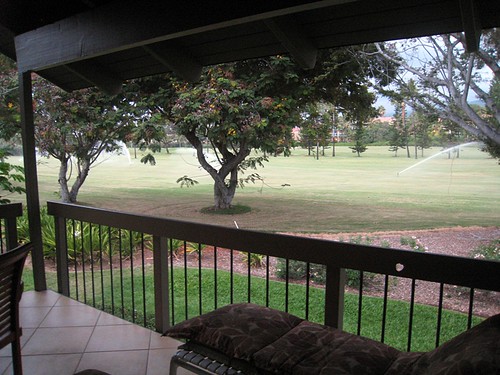 Lanai in the evening 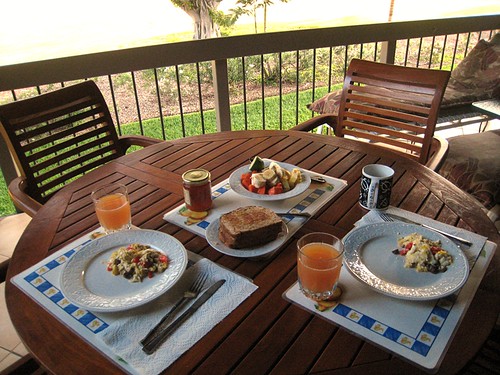 Breakfast on the Lanai