I haven’t been motivated to get on the trail much this year. I need to get out more. G is making a point of getting me on the trail in preparation for France. Two weeks ago we went up Rattlesnake which was pretty nice but busy. Today we went up Bandera.

The original plan was to go to Mason Lake. The trail is in great shape all the way. We picked up our friend around 9am and headed to the trailhead. It is just off I-90 about 45 miles east of Seattle. Very easy and very popular.

The road to the trailhead had been washed out by the major storm we had in December. They fixed it in April but it is quite amazing to see the slope of destruction and realize the power of water. There are trees stacked upon trees and boulders up the slope.

Once at the trailhead, we tried to sign-in but they were out of permits. So much for keeping track of who is on the trail. The first mile is a nice shaded walk passing two streams. The incline is mild. The trail then branches off to the left and starts some serious climbing. This is the new Ira Spring Trail and it is in great shape. We did this trail in 2003 before they new trail opened and it was brutal climb.

The trail climbs steadily and crosses several openings where you can see I-90.Along the way, you can see penstemon, Indian paintbrush, ocean spray, lupine and charming dogwood. The clouds had burned off and it was getting warm. After a couple of large switchbacks, we got to the junction of the trail, if you can call it that, to the top of Bandera.

I wasn’t that interested in going on the additional mile to the lake. It would just be swampy and full of bugs. So we decide to climb part of the way up to Bandera for the vistas. This final mile is a killer. The incline is about 45 degrees and it is a narrow little path of boulders. We were a week late for the wildflowers. Last week, the bear grass was stunning. But the over 90 degree days had taken a toll on the flowers and they were fried.

We went about 1/2 way up and pull off the trail onto some boulders. Here we sat among the heather, knickaknick, paintbrush and bear grass admiring the vistas while eating our lunch. Going down was actually worse than going up. It is a slippery ankle buster. We carefully went back down and joined the new trail.

The rest of the way back to the car was muggy and overcast. The patches of shade provided cool relief. Overall – 6 hours, 2000ft elevation gain, 4 miles RT.

Here are a few pictures: 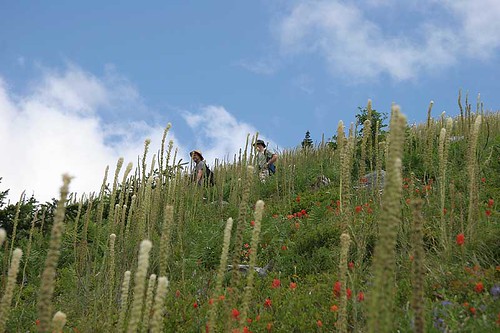 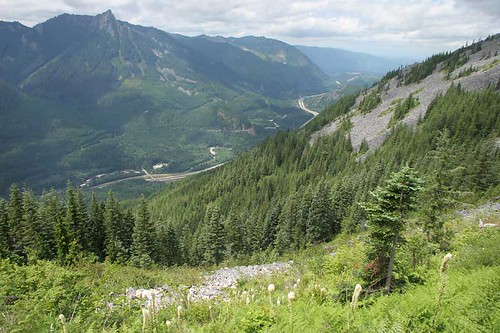