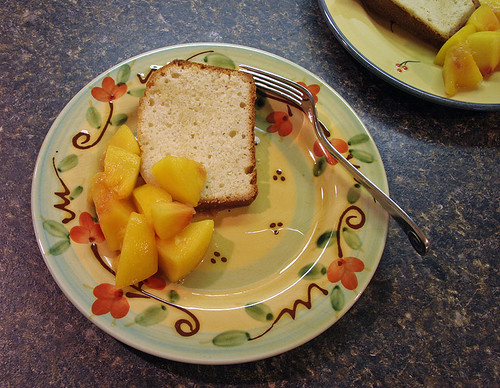 One of the few things I miss about not working is sharing my baking with my coworkers especially at Christmas. I would get an urge to bake and take batches of cookies and cakes to work. I would have dropped some off but I really don’t want to go anywhere in the snow.

The snow also caused us to postpone our get together with our friends. I was planning on baking something for dessert. I decided to go ahead and make something small for G and I.

I’ve been craving in something almond flavored. I love the cookbook “Baking by Flavor” by Lisa Yockelson. The cookbook is broken out into section by flavor. I’ve made several items from the Ginger and Spice section. I looked over the almond section and found a recipe for an Almond Butter Cake which sounded lovely.

The recipe calls for a bundt pan but I decided to half the recipe and bake it in a loaf instead. It turned out lovely. The cake is basically a sour cream pound cake flavored with almond and nutmeg. The crumb is perfect. I had some frozen peaches which I heated up. They were not as good with the cake as I thought they would be. They were a little too tart. It would have been perfect with berries. But the cake is definitely a winner.

Here is the recipe as I modified it to make only one loaf cake. It can be doubled and made in a bundt pan instead.

On low speed, alternately add the sifted mixture in 3 addition with the sour cream in two additions, beginning and ending with flour. Blend in the heavy cream. Spoon in to prepared pan and lightly smooth over the top.

Bake in preheated oven for 1 hour and 10 minutes or until medium golden and a wooden pick inserted in the cake withdraws clean. While the cake is baking, make the syrup below.

Cool the cake in the pan on a rack for 5-8 minutes. Invert onto a cooling rack with a piece of wax paper underneath to catch the syrup drips.

Immediately while the cake is still hot, brush the syrup over the top and sides of the cake. Cool completely before slicing.

Keeps 4 days and can be frozen. If frozen, thaw, slice and toast.

Place the sugar, water and liqueur in a small saucepan. Cover and set over low heat, when sugar has dissolved, raise the heat to high and bring the contents to a boil. Cook the liquid at a medium boil for 7-8 minutes until reduced and concentrated looking. It should measure 1/2 cup. Stir in vanilla and almond extract.

Syrup can be kept refrigerated for 1-2 weeks.